St. Joseph, Pray for Us 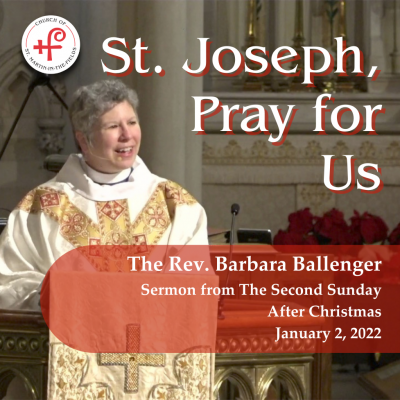 St. Joseph, Pray for Us

Revisit the Rev. Barbara Ballenger's sermon for the Second Sunday after Christmas, January 2, 2022.
Today's readings are:
Readings may be found on LectionaryPage.net: https://www.lectionarypage.net/YearABC/Christmas/C...
St. Joseph, Pray for Us
Barbara Ballenger, Jan. 2, 2022

Let us pray. Lord God, you spoke to Joseph in dreams. Speak to us so we may hear and follow.

St. Joseph, the spouse of Mary, has been listed as the patron saint of many things including:

He is to be invoked if you are doubting or hesitant. And if you want to sell your house you might consider buying a statue of him and burying it in the backyard. I believe my sister did this. Her house did sell, now that I think about it.

For someone whose own back story is a bit vague, a lot has been put on Joseph's saintly plate.

But if it were up to me, if I got to make that list based just what we heard in today’s passage from Matthew’s gospel, I would count Joseph as patron of:

Those who lay down their privilege.
Those in non-traditional families.
Those who obey their dreams.
And maybe all men who listen to directions.

Joseph, who plays a starring role in today’s Gospel, gets a rare moment to shine. In Matthew’s nativity story, Joseph -- rather than Mary -- gets the angelic messages, though he’s asleep for all of them, and he gets no good lines and no songs to sing. Still, today is a great opportunity to reflect on this quiet, obedient soul, who delivers the Christ child. It’s a good day to ask: how are we to follow his example, and for what might we ask his intercession?

The first two chapters of Matthew’s gospel gives us nearly all we know about Joseph.

Joseph’s family was descended from David through Solomon -- Jesus would inherit that distinction.
Joseph is upright and righteous, which means he keeps the Law of Moses faithfully.
And because of that righteousness, he would have divorced Mary when she was found to be with child, had not the angel told him to do otherwise.

That’s because Joseph obeys divine messengers when they speak to him in dreams.

In that regard he bears a resemblance to the Joseph of Genesis, who listened to his own set of dreams, ended up in Egypt and secured safety for his family there, setting the stage for Moses to one day deliver Israel from empire and captivity. Matthew’s nativity story looks a lot like the story of Moses, that seminal story of deliverance for Israel. There is an evil king to flee, magicians give counsel, the death of the innocents, and entry and exit from Egypt. Matthew’s diverse community of Jews and gentiles would get the connection. They would see how it tells the same story of deliverance as Jesus’ crucifixion and resurrection does.

But I think that Joseph, the husband of Mary, is more than an allegorical figure. He had no technicolor dream coat, no grand soliloquies, though he brought an earnest resolve to his role.

Not the way a savior does, but the way a midwife does -- protecting, facilitating, accompanying, assisting in the birth. If it were up to me I’d make Joseph the patron saint of midwives rather than house hunters.

One of the things I love best about Joseph is his ability to lay down his power and his privilege -- the rights that mosaic law and social order gave him over his betrothed. He had the ability to have Mary stoned to death for being pregnant with a child not his own, and if not publicly executed, then quietly divorced. He could well have obeyed the law rather than the angel. The law would have protected his dominance, upheld the toxic masculinity that has shaped cultural norms both ancient and modern.

But he chose not to. And that wasn’t disobedience to God’s law. It was a higher level of obedience to it -- an openness to the Word of God that transcended what Joseph understood up to that point. He is much like Mary in that way. They make a very good couple.

This kind of obedience made him socially and culturally vulnerable -- to ridicule, attack, arrest, death. Joseph’s vulnerability in laying down his power, looks much like the vulnerability that God took on in becoming human. The seminary word for that is kenosis: self emptying as an act of love. This was Joseph’s charism, his particular divine gift. He put down the power that society had given him and he picked up the grace that God gave him. This is an essential charism in our time, as well.

To follow the example of Joseph, then, is to practice a form of kenosis, laying down power and picking up grace. It is to obey the call to deliver Jesus into the world, so that Christ may do the work of saving it.

This is humble work, and it’s also whiley work, as we see in today’s Gospel. God subverts evil, slips through the fingers of empire, hides the divine self among vulnerable people, crosses borders and carries out the divine mission according to God’s dream. This is the source of my own hope in these uncertain times, as I consider what will subvert and thwart the powers that plague us.

It helps to tell stories of this ability to be humble and whiley and cooperative in God’s dream, as Joseph was. So another story comes to mind for me, one collected by the brothers Grimm and translated by D.L. Ashliman.

When King Conrad III defeated the Duke of Welf (in the year 1140) and placed Weinsberg under siege, the wives of the besieged castle negotiated a surrender which granted them the right to leave with whatever they could carry on their shoulders. The king allowed them that much. Leaving everything else aside, each woman took her own husband on her shoulders and carried him out. When the king's people saw what was happening, many of them said that that was not what had been meant and wanted to put a stop to it. But the king laughed and accepted the women's clever trick.

Other versions of the story invite the women to take what is most precious to them, and they leave carrying the village children under their arms and the men upon their backs. You can tell it’s a fairytale because of the happy ending, a king relents and stands by his word, unlike Herod or Pharaoh.

But I think what is most important about these stories -- whether it’s the flight into Egypt or the faithful wives of Weinsberg -- is not whether they happened but whether they are true. And the truth I see is this, the act of setting down privilege and picking up God’s grace yields a humble and whiley strength, which is required for the work of God.

The author of the letter to the Ephesians says it this way:

I pray that the God of our Lord Jesus Christ, the Father of glory, may give you a spirit of wisdom and revelation as you come to know him, so that, with the eyes of your heart enlightened, you may know what is the hope to which he has called you, what are the riches of his glorious inheritance among the saints, and what is the immeasurable greatness of his power for us who believe.

If we would have St Joseph intercede with God for anything on our behalf, perhaps it should be this.