The Grace to be Last 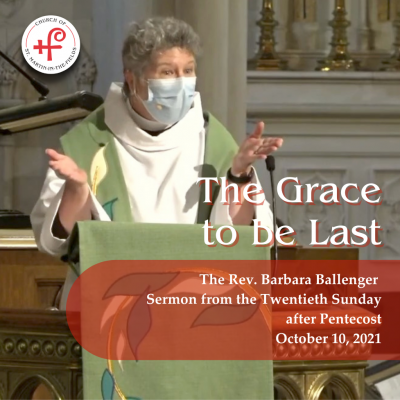 The Grace to be Last

Sermon by the Rev. Barbara Ballenger on the Twentieth Sunday after Pentecost, Proper 23. Today's readings are:

The Grace To Be Last

Lord God it is impossible on our own. It is possible with you. Help us to tell the difference. Amen.

(Sung) So low can’t get under it, so high can’t get over it, so wide can’t get around it, gotta get through that door.

I’ve done a good deal of church-based work trips in my day. You know the kind where you move the lawns of the elderly or fix the houses that have been destroyed in disasters. How many of you have been on that kind of a work trip, maybe many times? And how many of you when you’ve been on those work trips have heard somebody, maybe a fellow helper somewhere along the way, say, “that trip made me realize how much I truly have. I’m so grateful for what I have as a result of that trip.” Does that sound familiar? I’ve heard it every time, every single time. And sometimes it’s me that’s saying it or thinking it. The shorthand, or maybe the paraphrase of that sentence, is “There for the Grace of God go I.”

And that’s not to say that that feeling of gratitude isn’t real or that that thanksgiving isn’t an actual prayer, it’s just to say that those things might not be blessings. They might not be rewards. This is the harsh truth that our young man learns today in the Gospel of Mark. It’s a harsh truth for all of us who can identify with that young man – who have wealth and privilege and opportunity. In short, it’s the harsh truth of all who are formed to be first.
The rest of this sermon is directed at those of us who have been formed to be first, as this young man was. If you do not find yourself in that category, you are still free to listen in.

Now this young man was not a bad person. He’s not the villain of the story. He’s actually kind of sweet, although maybe a little naïve. He’s devout. He is keeping those commandments and that is no small thing. He is righteous. His heart is in the right place. He knows that inheriting everlasting life, what Jesus called the Kingdom of God, is a good thing to want. If we were describing him today, we might say he was a good person who believed in God and wanted to go to Heaven. But he didn’t take it for granted. He threw himself at the feet of Jesus, and asked this teacher who seemed to know a lot about it, if there was anything else he should do in order to be assured that he would be guaranteed God’s favor forever, eternal life.

I don’t think he quite realized who he was talking to. I don’t think he quite realized what he was asking. Because he was working under the assumptions that he had been formed in about what it means to be good in the eyes of God. Good fortune and wealth was a sign that you were doing things right by God. He had checked the boxes and he had the evidence. And that’s not a habit that is limited to First Century Christianity.

Still, for some reason this man wanted more assurance. I wonder if what Jesus had been teaching about the Kingdom of God had made this man feel just a little uneasy about his assumptions? The idea that God is King, and there being a future time when God would reign over all, was part of Israel’s understanding. That’s not new. The promise that the righteous would inherit God’s life was not new. But Jesus seemed to tell the story in a different way, as though the Kingdom of God was something that was unfolding right under people’s feet, as though it was something you had to seek, as though the way in might be different than what this man had assumed - as though maybe anybody could get in.

And so there he is kneeling in the dirt in front of Jesus, and Jesus looks at him, and he loves him. I’ve got to wonder if that divine gaze, that doubled-edged sword of love, wasn’t Jesus’ predominant answer to the man’s question. Before you do, you must be. You must be loved by God. You must let God love you. But the love of God is not passive. It behaves just like the Word of God that we heard about in that passage from Hebrews today. Indeed I think they are one and same:

“Living and active, sharper than any two-edged sword, piercing until it divides soul from spirit, joints from marrow; it is able to judge the thoughts and intentions of the heart. And before God no creature is hidden, but all are naked and laid bare in the eyes of the one to whom we must render an account.”

When Jesus is done looking at that man with love, Jesus knows exactly what this man is holding on to and exactly what he lacks. And he lacks nothing, meaning he lacks emptiness. He lacks spaciousness, room for the kingdom to enter in. What he has is keeping him from what God has for him. I wonder if this isn’t Mark’s kind of wonky version of the beatitudes. You know, “blessed are the meek, blessed are those who mourn.” Mark doesn’t have that list of the Blessed the way Matthew does, and Luke, in those gospels. But I think there are those ingredients there. This young man see himself as richly blessed. He has many possessions. He uses the phrase, “what must I do to inherit eternal life?” which is like saying, “what must I do to have the Kingdom of God? And who in those lists of the Blessed, who gets the Kingdom of God?” In the Gospel of Luke it’s the poor who receive the Kingdom of God, and in the Gospel of Mathew it’s is the poor in spirit who receive the Kingdom of God. In the Beatitudes the rich aren’t listed as being blessed. The first aren’t mentioned either.

So this passage from Mark should make us squirm right along with the rich young man – if we have many possessions, or if we are used to being among the first. Now a good test of whether you fit in this category is to just imagine Jesus talking to you in this way. Jesus looks at you with love and says “you lack one thing. Take everything you have and sell it and give your money to the poor and follow me.” Now just pay attention right now to the anxiety level you might be feeling at this moment. That’s the indicator. “That can’t be the requirement, can it, to get into the Kingdom of God?”

I think for faithful people who have been formed to be among the first, eternal life feels sort of like what comes after a long and prosperous life. It’s our reward. Another possession to look forward to. Sort of like retirement. But here Jesus makes a very cutting point that that is not what it’s about. It’s not the possessions that get in the way. It’s not the wealth. It’s the love of it. It’s the hold it has. It’s the way that wealth forms a habit of being first.

The one thing the young man lacks, and that I know I lack – is the will to put that down, and to follow Jesus empty into the Kingdom of God. This man of privilege can’t buy his way in, he can’t enter on his own merit or his own righteousness, he can’t use his blessings to pry open the door. With God all things are possible, because that’s who lets us into the Kingdom. I don’t think the man realized he was kneeling right at the doorway of eternal life, right at the entrance of the Kingdom of God. “Why do you call me good”, asks Jesus, “if you don’t really know who and what I am?”

Over and over the message of the scriptures is that the righteous practices, the faithful acts, the following of the commandments are all activities that are meant to express the covenant of love with God, they are meant to shape our hearts into ones that deeply love God and neighbor more than ourselves. And if they don’t do that, they won’t help us enter the kingdom of God. And the offer of eternal life with such a God will shock us and disturb us and send us sad away.

But I don’t think the man’s sadness is the end of the story. I think we assume that this man rejected Jesus’ offer, and we assume that he didn’t make into the Kingdom. But I think because his heart so was troubled, and because Jesus’ word was working in him like a two-edged sword, I want to believe that he gave some thought to what it would take to give up all those things. I think it would have been very hard for him. But not impossible. And that’s my hope for us.

What must we do to inherit eternal life? We must die. We must die to an old way and start living into a new one, because right now the world we’ve made under the old way is not working. And somehow, those of us that have been formed to be first have got to figure out how to step to the back of the line. I see this in our racial repair work, in our economic justice work, in our work in transforming oppressive systems – those of us who have been formed to be first have long dominated the conversation on what the solutions should be, without really seeing ourselves as part of the problem. This Gospel says we’ve got to set that down. We’ve got to give that up. And frankly, I’m not sure how we do that. I’m not sure how we do that exactly in a system that has been so profoundly and thoroughly stacked to our advantage.

The reversal of power, privilege and resources required to truly right all that has been wronged over so long a time seems impossible. My prayer lately has sounded a bit like, “Well then who can be saved?” And I find myself clinging to Jesus’ answer. “For mortals like you Barb, it is impossible. But not for God.” Which puts us in the realm not of miracles, but of grace. That God-given, spirit driven power to do God’s will when all indications are that it’s not gonna work, that’s what we should be praying for. That’s what we should be asking for: the grace to be last.

(Sung) So low can’t get under it, so high can’t get over it, so wide can’t get around it, gotta get through that door.