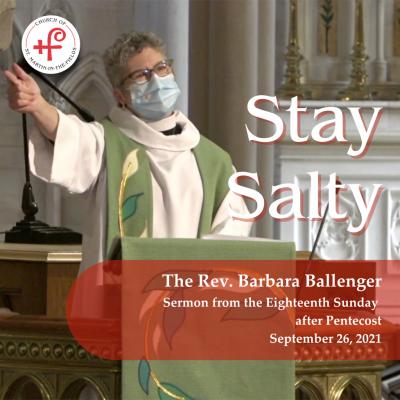 When my kids, who are in their 20s, are annoyed with something or disappointed or are feeling a little bitter they say they are feeling salty. If they know there’s something that’s upsetting me they say, “Mom, you’re a little salty today aren’t you?”

For Jesus it started last Sunday on that walk to Capernaum with his followers, and Jesus had to listen to his 12 right-hand men arguing over which of them would be first in the Kingdom of God – as though he can’t hear them, as though he can’t hear everything. And when he asks them about it, they go all silent, like disciples do. And that makes Jesus a little salty.

So as you might remember from last Sunday, he gathered the 12 together in the house where they were staying and said, “if you want to be first, you must be last of all and servant of all.”

He introduced the child not because they are particularly insightful or humble, but because in the socio-familial relationships of the Roman empire, children were dead last. If they were born with deformities they could be left out to die by exposure. So if you’re going to serve the least ones, like this child in Jesus arms, you’ve got to be willing to be less than least.

This week, that child is still in Jesus’ lap and the 12 Apostles are still struggling with what Jesus is telling them.

You know, so much has been made about the 12 apostles, about how they were the church’s first leaders, the representatives of the 12 tribes of Israel, the predecessors of bishops and priests. I just wonder if Jesus wanted 12 handy examples of what not to do to get into the kingdom of God. “You’ll do. Let’s have John today, it’s John’s turn.”

So today John steps up. ”Hey speaking of doing things in your name, Jesus, there was this guy casting out demons in your name, but he wasn’t following us, so we tried to stop him.” That was John. I wonder if he was feeling a little salty about the competition coming from outside the group.

It’s as though John is saying, “well if I can’t cut out the least ones, who can I cut out? How about him?”

If Jesus wasn’t salty before, he is now. And he not so gently turns the apostles’ attention away from the finger pointing they were sighting down and to the three pointing back at them. They need a lesson on how to be “least of all, and servant of all.”

“If you are looking to be first in line by excluding, judging or because you’re jealous of what they’ve got, cut it out.”

“If you are causing someone who is struggling with their faith to stumble and fall because of what you say or do around them, cut it out.”

“And if you have things in your life that are causing you to put yourself in solidarity with anyone or anything other than God, cut them out.”

Then Jesus goes on this big exaggerated litany of all the body parts they should be willing to lose, if they are causing his followers to sin. And at first I thought he was going back to the lesson he taught in Mark 7, where he told his followers that evil doesn’t come from the outside, but from the inside with things like greed, wickedness, deceit, arrogance, and foolishness. That would apply pretty well here. So of course your eye and your hand and your foot aren’t making you sin, but the much deeper agendas are.

But then I remembered that this particular list that Jesus refers to with a good measure of hyperbole had a particular meaning in Jesus’ day. These were the ways that prisoners of conquest were maimed by Rome so they wouldn’t escape their servitude. So prisoners were sometimes blinded and then given manual labor to do that they could never find their way free of. Or their hands or feet were cut off so they couldn’t run away. And that’s how Rome built its great empire. That’s one of the things that came to mind when people talked about the blind and the lame.

So Jesus may also be saying to the arrogant 12 – “how willing are you really to be the kind of servant that God has called you to be? Are you willing to sacrifice your body to keep yourself bound to your service to me? Because that’s what it means to be first in the kingdom.” Like I said – Jesus is salty.

But it’s important that his followers, especially those chosen to spread the gospel, get this right. Because as soon as church membership and discipleship becomes a contest, as soon as some are considered more important than others by their proximity to Jesus, or their status, or their gifts or their apparent blessings, then the fragile unity of the Jesus movement will stumble and fall. There is no room for factions or triumphalism in it. It hurt the church then and it harms it now.

So what does that mean for us today, in this assembly? I think it means that if we find ourselves continually pointing to others as the source of blame for our dissatisfaction, we might need to examine who the rest of our fingers are pointing. We might need to look at whether we are the disciples that God requires for God’s work. When we’re feeling like blaming, it might be an invitation to self-reflection.

So we might ask: what do we do that causes others to stumble in their faith, or in their belief? What do we do as members of the Jesus movement that impedes its work, the growth of others? I could turn it around and make it nicer and ask “what do we do to help people to grow?” But sometimes we have to look at what we do that causes people to wilt, to walk away, to visit and not come back, or to wonder if Christians truly believe what we say we do.

So I’ll just talk about me. Here are some things that I have been guilty of in my life as a Christian:

Failing to welcome,failing to include, or appreciate and offer hospitality. Maybe making sure that I have my spot in a new group and being oblivious that others want to come in too.

In times of church strife, stirring up dissension and inhibiting healing by gossiping, by undermining, holding grudges, or carefully tending my personal agendas.

Expressing my disappointment in tones that would make it very difficult to engage with me on the issue at hand because I so fanned the flames around me,

Acting out of my prejudices and privileges before I even know they’re out of the box– of race, class, and age – as soon as my power gets challenged.

I could go on of course. These are the fingers that tend to point back at me. How about for you?

“Whoever is not against us is for us,” Jesus says of the unnamed exorcist that John has in his crosshairs. But the question for John and for us, instead is, how are you “for God.” In what ways are you that servant, that offering to God, that sacrifice that Jesus calls his followers to be?

This is where salt enters the story in a slightly different way than I‘ve been using it.

“For everyone will be salted with fire,” Jesus says. Sacrifices to God in Jesus’ day were purified with salt and with fire. An animal sacrifice, in the experience of Israel, was an act of prayer and worship, and praise, humility and intercession to God. You prepared a sacrifice carefully.

How have we prepared ourselves to be “for God?” How are we fashioning our lives so that they serve God, and God’s love, and God’s will? What are we salting our lives with, so that they build up rather than tear down, so they are fit for the work that God Is doing in the world?

Here I want to give a brief shout out today’s reading from James, who encourages us to salt our lives with prayer. In all things. We are not to just use God as some divine help desk; but rather, to fully season our lives in joy and pain, in illness and soul-sickness and wellness and whole-heartedness with the kind of prayer that fully surrenders to God in our lives. If we see people who have fallen, we are to help them to rise. If we see people who have wandered, we help them to return. That’s what you do when your life is fully seasoned with prayer and relationship with God. Dorothy Day called it making it easier for people to be good. We make it easier for people to be good. We make the church community a place people can come home to; where people can find peace.

“Salt is good,” Jesus reminds his followers. “But if salt has lost its saltiness, how can you season it? Have salt in yourselves, and be at peace with one another.”

Permission to podcast/stream the music in this service obtained from One License with license #A-701187. All rights reserved.