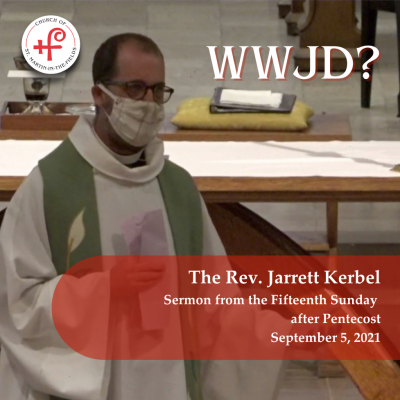 Gracious God, we give you thanks for the example of the syrophoenician woman who cracked open the covenant to include all gentiles thereafter. We thank you for her persistence and her faith that in your abundance there was enough for all. In Christ's name we pray. Amen.

So, in the early 1990s I was just starting out as a priest as a youth minister. What do you do with a priest in his twenties? Youth Minister. Luckily I loved it and had a lot of fun with it. This is also the time when in youth ministry there was this great outburst of bracelets: friendship bracelets and cross bracelets, and one of the most popular ones with my group was the one that said “WWJD?”

“What Would Jesus Do?”

And I wore one to go along with the group, and it was a lot of fun, but when I read the story of the syrophoenician woman I wanted a second bracelet to put on top of it, and that one would say “DDWJJD.”

“Don’t Do What Jesus Just Did.”

Because here we have in this wonderful Gospel of Mark, a very uncomfortable reading. Very uncomfortable for anyone who loves Jesus to see him acting as crabby and nasty and bigoted as can be. I could apply other words but we’re in church. It's a very upsetting passage. He refers to the syrophoenician woman as a small female dog. We know there's another translation for that in English. That's how shocking this is.

What is going on with this reading and how do we approach it? Well, I approach it in two ways. One, I celebrate the syrophoenician woman. That's my focus. Her wonderful persistence, her wonderful insistence that there was room enough at the table for her and her daughter, to me is the voice of prayer and faith in the story. She's the example of what faith is, and I believe she is the gate opening moment for all gentiles who come into the covenant. She breaks open the covenant by agitating Jesus. She agitates Jesus in the most clever and subtle of ways, which to me feels like she had heard about this feeding of the five thousand, which had happened in chapter six in the Gospel of Mark (we're now in chapter seven) and she took that message to heart, that in the abundance of God's mercy there was room for her to be fed and healed as well.

So for example, it's a very strange story. Jesus goes all the way outside of Israel to Tyre and the first thing he does is goes into a house and tries not to be disturbed. I picture him going in, shutting the door, and seeking privacy. Jesus, as the story goes on, as I said, is crabby, judgmental, aloof, inaccessible, and favoring one group of people over another, showing favoritism, partiality - and these are all the things that the gentile audience feared were true.

Jesus repents from drawing his line too harshly, and allows for the healing, and allows ultimately for the extension of the promise of life in God, past the original covenant, with room enough for all. So first let's give thanks to the syrophoenician woman. She persisted and she opened up the covenant that includes us now. I speak as a gentile in that sense.

And what we have after this revelation in the Gospel is its application in the letter of James. Now take a step back, use your imagination. Remember that these letters to early church communities were read out loud to the community. These are not private correspondence. This letter was read out loud to that community. Imagine a gathering of the poor and the rich - the oppressed and the oppressor - who heard the letter of James together.

That is a shocking confrontation. The struggle going on in their midst is named. They are acting like the unredeemed world when they gather in their assembly for worship. When they gather around the table of Christ they're bringing in the practices of the world to this place where they don't apply anymore. The wealthy are being treated with more regard and being allowed to treat the poor with disregard. “Sit at my feet”...the kind of things you can't say at the Lord's table. And James is confronting them with this very difficult but true word, that in the Kingdom of God all the citizens of that kingdom are equal. And this is a shocking word just said right out there in the open, because for those with more status that's going to feel like a demotion, and for people in the unredeemed world with less status that's going to feel like a promotion. So they can meet as equals in Christ.

I know this conundrum firsthand and practically speaking. When I worked in Chicago I did trainings with the Industrial Areas Foundation where we trained leaders from all over Chicagoland (South, North, West, Eastside) to do delegations to meet with elected leaders to advocate on the basis of our faith for certain changes like universal health care, for example, or school funding, and one of our big training agendas was always helping our members not to give away their power. Not to give away their power.

They had been trained over the years that when they met with an elected official they should defer and just be grateful to be in the powerful person's presence. They should be indirect and careful and meek. And I saw it happen over again and over again, and I participated. I'm from a military family - “yes sir,” “ no sir,” “yes ma'am,” “no ma'am.” I can defer with the best of them. And we had to work together on this notion taught in James that we are equals in the citizenship we have in the Kingdom of Christ, and in that dignity we can speak the truth we need to speak to the powerful.

It only took a few times when we got shunted off to the congressional aide who just got out of college, while we watched the pharma executive or the big donor go into the senator's office, for my people to get the message and sit down and say, “We'll wait for the senator, thank you very much.”

This is the strange world of the Gospel where we are called into this equal dignity in Christ and depending on where we find ourselves in the status hierarchies of the world around us, this may induce a journey either of humility and humbling, or a journey of growth and claiming dignity, so we can meet together in that equality of children of God. Amen.

Permission to podcast/stream the music in this service obtained from One License with license #A-701187. All rights reserved.