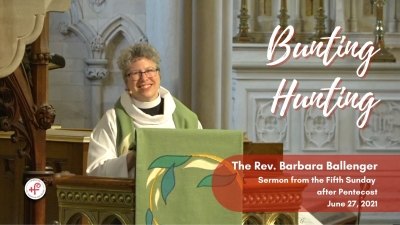 “What is the kingdom of God like, to what can I compare it? It can be likened to a priest on retreat who hears an unfamiliar bird call in a tree while on a walk and wants to discover its source.”

Listen in to the Rev. Barbara Ballenger's sermon for the fifth Sunday after Pentecost, Proper 8.

Readings may be found on LectionaryPage.net for Proper 8, Year B.
Transcript:

[The Rev. Barbara Ballenger]I was on retreat this past week at Holy Cross Monastery in New York. They’re only just beginning to open up for a few guests, so I had this tiny monk’s cell and most of the monastery to myself. From my window, I could see the meadow that slopes down to the Hudson River, the mown paths that cut through it and the trees that ring it. The weather was perfect. The food was great. The chanting of the brothers at prayer was sublime.

I get the attraction. I could be a monk – for a week. But I also kind of missed all of you. In fact I wanted to bring you a souvenir. Unfortunately, the gift shop hasn’t yet reopened and my suitcase was only so big. So I brought you a parable, collected in the meadow on my first full day at the monastery. It goes like this:

What is the kingdom of God like, to what can I compare it? It can be likened to a priest on retreat who hears an unfamiliar bird call in a tree while on a walk and wants to discover its source. Sweet sweet, chew chew, Sweet sweet sweet. So she consulted the bird finding app on her phone and discovered that it belonged to an indigo bunting – a bird of great price, in the priest’s eyes at least. Dark blue head, cerulean wings. It was a bird she dearly wanted to see up close in all its glory.

But first she sat on a bench at the edge of the meadow to read Isaiah 55, which Br. Robert, her spiritual director for the week, suggested she start her retreat with. You can’t beat Isaiah 55. Let all who thirst come to the water…. Seek the Lord while he may be found … call upon him while he is still near.

Sweet sweet, chew chew, sweet sweet sweet, called the bunting. The priest decided to set aside her bible, and get some seeking practice. She followed the bird call back to the nut tree where she first heard it. But now the call was coming from across the meadow in the willow. So she headed to the willow. Only to find when she arrived that the call was coming from the oaks near the river. So she followed the path through the meadow to the oaks near the river, and she got her feet wet along the way. But when she got to the oaks along the river, the bird was back in the nut tree where she heard it the first time. And so on.

Sometimes she heard the bird. Sometimes she saw it flying at a distance. One time it burst out of the grass 10 feet in front of her – a flash of blue was all she could see. And she began to wonder if the bird had a thing against priests.

Finally the indigo bunting led the priest all the way around the meadow back to the bench where she started. She sat down to catch her breath and re-read Isaiah 55, in case there was some advice in there on making birds appear so you can see them up close in all their glory, and maybe take a picture to put on Facebook. Instead Isaiah announced: For you shall go out in joy and be led back in peace; the mountains and the hills before you shall burst into song.

What Isaiah meant to say was: Let those of you who have ears to hear listen, because you’re not gonna get a close look at this bird today. Or the next. Or the one after that.

Somewhere in the middle of her many treks across the field, the priest – who was me – got the feeling that maybe God was playing with her, and she began to laugh too: at herself, at her belief that the indigo bunting might land right in front of her, and at the bird’s uncanny ability to take off again every time she got near.

God was indeed giving her a lesson on seeking, that morning. But God was also giving her a lesson on finding. Because there never was a moment when she wasn’t with that bird. She could hear its song. She could see its flight. Her desire for more kept her after it; she wasn’t just seeking and seeking and seeking, she was finding and finding and finding, more and more about that bird as the day wore on. She got particularly good at recognizing its call.

The lesson made her realize something about faith: it’s not the thing you seek, it’s the thing that makes you start seeking in the first place. It’s the desire that jump-starts the curiosity; that makes one take off after that wonder. If you have any desire for God at all, it’s because faith is already at work within you.

It’s the practice of faith, the ongoing attention to its pull and its push that truly helps us to recognize God in our midst, to get used to the places where the divine draws near. That’s why the monks gather five times a day to pray. We need that faith, honed in the everyday acts of morning prayer or the deep dive of retreat, that helps us to navigate the really challenging waters, to follow the signs of God’s presence when there is much to distract us, especially fear, which is the greatest adversary of faith.

This is the kind of life and death seeking and finding that is going on in Mark’s Gospel today, in the stories of two people driven to Jesus’ feet by the faith in them.

Mark tucks the story of the healing of the woman with the hemorrhage right in the middle of the story of the raising of Jairus’s daughter. This is the do-or-die kind of faith, which busts right through religious laws, pushing crowds and doubting neighbors to get to its destination.

Jairus gets to Jesus first to plead for the life of his 12-year-old. I wonder if the crowds sort of parted for him, given that he was a leader of the synagogue and all. But when Jairus reaches Jesus, Jairus hits the dirt and tells him his story of need. “Come lay hands on my daughter who is dying, so she will be healed,” he begs. No bargains, no power plays, just 100 percent need and the insistence that Jesus can meet it. Jesus can’t resist faith like that. He heads off to Jairus’s with the whole crowd in tow.

And that’s when the woman with the hemorrhage catches up to Jesus. She had no advocate. She has been alone for 12 years. There are a few things to keep in mind about her condition. It involves blood, and that makes her ritually impure according to Leviticus. The purity laws governed people’s access to worship, to the holy, to God, and to one another. Which means that as long as she has this condition, 12 years at this point, she was someone to avoid. Because if someone who is ritually impure touches you, you become ritually impure as well, and it’s not a small matter to undo that. It’s not impossible, but it’s not easy either. So imagine a woman who has likely been cut off from her community and from worship for 12 years, and she’s dying from her ailment. But she has a very strong desire for life.

I wonder if the crowds sort of parted for her, given that no one wanted to risk making contact with her. When she reaches Jesus she can only bring herself to touch his hem, because she is violating all sorts of laws here – a woman touching a man, a ritually impure person touching someone else. So it makes sense that when Jesus asked “who touched me?” she was filled with fear and she hit the dirt and poured out her story of need.

Now, if she had been merely extracting healing from Jesus, I think she would have denied she was involved at all, just disappeared back into the crowd. But she knew she had been driven to an encounter with the divine – and there is only room for truth in that moment, not only God’s truth but her truth as well. And Jesus can’t resist faith like that. “It’s what healed you,” he tells her and sends her off with her access to her community and her God and her future restored.

But the story doesn’t end there. Because Jairus’s faith is about to take a beating. Family members report that his daughter has died. Their doubt of Jesus and of Jairus is palpable – why trouble the teacher any further, they reason with Jairus, as though it was a bad idea in the first place. They laugh at Jesus when he insists there’s still hope. Jairus realizes that he has a lot to lose here, his daughter, his family, his reputation, his stance in the community, and he becomes afraid.

This is where Jesus takes charge, and teaches a lesson about how to keep faith alive in adverse conditions. Jesus meets the source of fear and faithlessness head on. Just as Jesus rebuked the storm in the previous chapter of Mark to calm the fears of his disciples when they were crossing the sea, Jesus rebukes the taunting crowd, casts them out and creates a space of calm that allows Jairus’s faith to resurface. Sometimes to keep the faith, we have to ask Jesus to do that for us, to remove the source of our fear when we can’t do it ourselves.

After that it was just a matter of trusting Jesus to do what Jairus asked him to do in the first place. Only now it’s not his daughter’s health, but her very life that Jesus restores. Much more than Jairus bargained for, when faith sent him out looking for the Lord.

“Seek the Lord while he may be found,” Isaiah 55 tells us, “call upon him while he is near.” In Jesus, God places the divine self where it can be found. In Jesus, God draws near enough for us to know we can be heard. Faith prompts us to seek and cry out in the first place. Sometimes, it just gets us as far as the hem of Jesus’ cloak, or the dust at his feet, and Jesus takes care of the rest.

And other times, faith hears the beguiling call of God, catches a flash of the image of God’s own eternity, and wanting a better view of all that glory, gives chase.

Let those of us who have ears to hear, listen.

Permission to podcast/stream music in this service obtained from One License with license #A-701187. All rights reserved.