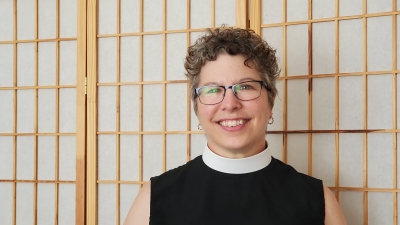 In her sermon, the Rev. Barbara Ballenger describes how Eden is the first house divided. Our history as a people of faith is rife with division, violence, and separation from God. But in Jesus we are offered a chance to reunite, to rebuild the house divided. Are you ready to accept the invitation into a house united?

Sermon by the Rev. Barbara Ballenger for the Second Sunday after Pentecost, Proper 5, Sunday, June 6, 2021.

Where are you? Comes the cry from Genesis today. And it’s not humanity calling out to a hidden God who seems to have abandoned us. No in the third chapter of Genesis it is God crying out to God’s people, who aren’t where they should be

I wonder if that question followed Adam and Eve wherever they went from that point forward? I wonder if every prayer we send out to God is actually prompted by this silent prelude: God crying out to us, Where are you?

The human couple’s answer is– We’re hiding. We’re ashamed. We’re naked. Because we know things now that we never knew before. And it’s his fault, it’s her fault, the devil made us do it. Do you notice that they never once apologize? They’re honest, but they don’t seem to be sorry.

Then God fashions a partner for Adam and the first couple get on with their lives for a while. Who knows for how long they got up each morning, and chose not to eat of the tree of the knowledge of good and evil. How long did they consciously choose to stay in that garden, where work was a pleasure, labor was easy and everyone was a vegetarian, as long as you didn’t take from that one tree?

It’s just that one day they choose the tree. They had some help for sure. But really it was their own decision to make and they made it. The fruit was good to eat; it was a source of wisdom that they didn’t have before. And once they tasted it, once they knew it, they couldn’t un-know it. The consequence was that they’d be making their own decisions from now on. And the first thing they decided to do was hide from God.

Eden became the first house divided. There wasn’t room for more than one God. So Adam and Eve had to move out. The labor that once was a delight, now became toil. The earth they once stewarded became their enemy. The animals they once named became their prey. The first murder of an innocent man happens a chapter later, an act born of an envious brother. And their new house is divided.

That’s Israel’s origin story, and it’s ours as well. In the rest of the saga God follows humanity out of the garden and keeps calling “Where are you?” And houses rise and fall, form and divide. Until in Jesus, God provides a new way of return.

And that involves seeing the household of God in an entirely new way, by looking beyond the way people usually set things up, to the alternative world that God is forming through Christ.

Not even Jesus’ own family can see it at first, we discover in Mark’s gospel today. The crowds have gone wild with desire for the Good News and healing that Jesus has been providing; Jesus has just named 12 apostles to share the load with, and things are so busy that there’s not even time to eat.

But Jesus’ family, his mother and his brothers and his sisters, are embarrassed. They come in person to fetch him away; they just want him to come home so things can go back to how they should be. They fear that he is out of his mind. And Jesus disobeys. He challenges one of the key components of Israel’s identity -- loyalty to family, stick with your own, obey your parents.

Theologian NT Wright puts it this way: “God is doing the unthinkable: he is starting a new family, a new holy people, and is doing so without regard for ordinary human family bonds. Unless you read verses 34 and 35 as deeply shocking, you haven’t got the message.” (Mark for Everyone, p 38).

It is shocking to Jesus’ family. It should shock us still today, in a society where protecting one’s own family is often a good enough reason to deny other families the resources they need.

In Jesus’ day such a defiance meant you were either insane or evil. And if evil, Jesus points out, he would make for a pretty ineffective demon, since he’s undermining the powers of sin at every turn.

Through the Good News that God is at hand, through the strength of his healing and his inclusion, through his table fellowship, through the life he will lay down and the forgiveness that he will offer, Jesus binds the strong man. Jesus subverts the divisive forces of evil, of empire, of kinship bonds, of exceptionalism, and throws open the doors to a new house.

The Apostle Paul understood that recognizing what God had done in Christ required a new way of seeing. It shows up in his second letter to the Corinthians, whom he urged to look to the invisible work of God, rather than what they were used to focusing on.

The Christians in Corinth had this tendency to confuse their wealth and their prosperity and their egos with God’s favor, as though these were the visible signs of their salvation. They were becoming a house divided by their own arrogance and their class divisions. All the things they treasured about themselves just made up the outside of the tent, Paul insisted. They needed to keep their eyes on what God was doing within.

To look at what is not seen, to look to eternal things, requires belief, the eyes of faith, the inner yes to the divine offer, not just for the Corinthians, but for us as well.

And yet, in these scriptures and in this act of worship, we are invited to believe that God has been remaking the tent from the inside out. This is how God heals the breach. In Christ, God makes the divine self something that can be chosen, taken, received, over and over again, visible to eyes that want to see him.

It’s as though, in Christ, God has reverse engineered the garden from the old story. Eden featured a tree whose fruit had to be continuously denied in order for humanity to remain with God. One taste and the deal was over, the tale goes.

In this new way home there is also a tree, in the form of a cross. The repair before us also involves a tasting and a seeing with new eyes, it involves a death that results in eternal life. It is Jesus himself who is on offer, who is the food on the plate, who is the choice we can make, our invitation into a house united in God.

Keep this choice before you as you reach for the Bread of Life today, whether you come to the table here or respond to Jesus’ invitation to receive him in spiritual communion. In both cases we look beyond what we can see before us. And at that moment when we pause in prayer to receive him, make your choice. What is on offer is a house united, a breach that is healed, new life with the one who has been calling and calling: “where are you?”

Amen.
Permission to podcast/stream the music in this service obtained from One License with license #A-701187. All rights reserved.