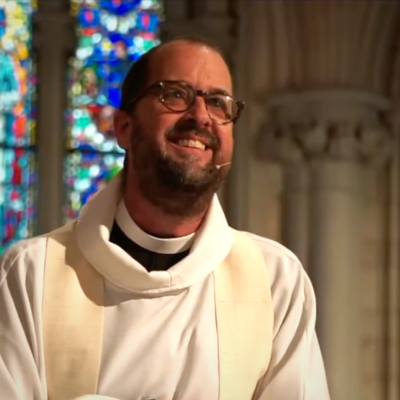 On Good Shepherd Sunday, the Rev. Jarrett Kerbel challenges our illusions of safety and security and invites us to consider who are the sheep and who are the wolves in our society today.

Readings may be found on LectionaryPage.net for Easter 4, Year B.
Transcript:
[Introductory Music]

Abiding God, we give you thanks that you are greater than our hearts. Dispel in our hearts all self-torment and self-judgment and negativity that hold us back from the boldness we are called to in the power of your love. Lord God, make us bold that we may follow your Good Shepherd who is our model of a life lived for the most vulnerable. In Christ's name we pray, Amen. Please be seated.

While at the altar at the 8 o'clock service, and having meditated on the Good Shepherd this whole week, what came up in my heart most strongly was my most inspiring models of the Good Shepherd in ministry that I know. And so if you're at home you can open up a tab on your computer, or on your phone in the pew actually, and Google Father Stanley Rother, a priest martyred in Guatemala in Santiago Atitlán. I think I've talked about him before, but he is my great example of what a Good Shepherd is. So please take that as a little homework to go deeper into the Good Shepherd story with Stanley Rother. And also the martyrs of Quiché, who were just beatified yesterday, three priests and seven lay catechists, including a 12 year old boy, who were martyred by the Guatemalan military. Look them up if you want to go deeper into the boldness of the Good Shepherd. That's a bit of an improv there at the beginning, but I wanted to assign homework early.

My sermon is called “Naming the Wolf.” We need to be careful about how we name the wolf. We also need to be careful how we name the shepherd, need to be careful about our assumptions about the sheep. I could preach a sermon about wolves in general, and shepherds in general. I could use pastoral stories about sweet sheep and scary wolves. I could talk about sheep as an undifferentiated mass of docile creatures standing in for people as the metaphor invites. Likewise, I could preach about the wolf as a generalized existential fear we all share, and boy have we shared it this past year. And we could talk about sheep representing a general human need for protection, once again something we have all felt this year. However, the murder of George Floyd, the uprising that followed, the trial, and now the verdict on this past Tuesday remind us of the importance of naming who is threatened by who. Naming who are the wolves, and who we assume to be wolves, and who we may or may not think of as a Good Shepherd, because it seems it is often the protector who is threatening, and the one falsely perceived as threatening who needs protection

The story of the Good Shepherd, when taken seriously and in the context of scripture, convicts us, and it convicts the way we order our world and prophetically offers a new world, ordered justly. In our society, the most powerful claim to be the most fearful, and that fear is manipulated and then manufactured politically to create systems of public safety and incarceration that inflict massive damage and violation on the most vulnerable. The protectors protect the most secure, and inflict threat and fear and violence on the most insecure.

I have a friend who lives way out in the Northwest suburbs, way up the extension, and she lives in a gated community. And I love to ask her “gated against whom?” She lives in a house with an elaborate alarm system and I love to ask “Why?” She is behind a blue wall of well-funded police and private security, not to mention a full gun cabinet in the house. This friend is fully wrapped up in this idolatrous atmosphere of manufactured fear. This person is constantly alarmed, constantly on edge by how much time I spend in Philadelphia, in Germantown, in North Philadelphia, and the people I interact with there. She's constantly worrying about my trips to Guatemala and Haiti and the danger I must be in there yet. She has it exactly upside down. She has the exact reverse from inside this manufactured bubble of fear. She does not see the protection granted me by my whiteness, by my maleness, by my social class, and when out of the country, by my American citizenship. She sees threat where her run-of-the-mill American racism has taught her to see threat, in Blackness, in brownness, in foreignness, in poverty, in “urban” areas.

So we must be careful how we name the wolf, and how we name the shepherd, and how we understand the sheep. The Israelite audience that Jesus would address would know all this already. For them, the Good Shepherd is obviously a political image. This is the Good Shepherd who is the righteous ruler of God's people. We, in the centuries since, have made it a pietistic, personal, and sentimental image, and taken away its root meaning. If we were deeply steeped in the Hebrew prophets like the original audience, we would hear the Good Shepherd as political, communal, and divine. We would hear it in the light of Ezekiel Chapter 34, where God claims the title of shepherd as a divine name, a name for God, and where God names his servant David, an actual shepherd, as shepherd of his flock. In this passage, in Ezekiel 34 (which I recommend as more homework—you didn't know that you're going to get so much homework this morning), the Good Shepherd is the leader who is set apart to “feed his sheep with justice.” Feed his sheep with justice. The Ezekiel text gives the following examples of what that looks like. The Good Shepherd is to put the sheep into the right order, to protect the leaner, weaker sheep against the fatter, stronger sheep. On the face of it, that is a political instruction, putting our common life in right order. The shepherd is to stop the fatter, stronger sheep from trampling the grass in the pasture left over for the weaker, leaner sheep after the fatter, sheep are done feasting. The Good Shepherd is to stop the fatter, stronger sheep from budding the leaner, weaker sheep with flank and shoulder away from the good pasture. The Good Shepherd is to stop those same fatter, stronger sheep from fouling the clean water with their feet so the leaner, weaker sheep who come after them may have pure water to drink. And someday, I will do an Earth Day sermon on this exact same text.

The laying down of the life of this shepherd is a reference to the cross of Jesus. It's how the author of John talks about the cross. And the author of the Gospel of John sees the cross in a very unique way, through the lens of victory, not the lens of victimhood. Jesus lays down his life under his own power. He repeats that. Jesus lays down his life under his own power as an act of loving intervention, putting his body between the threatening power of empire and those oppressed, damaged, and violated by that power. We all know that the oppressor always claims to be the protector, always claims the mantle of Good Shepherd. So God does something utterly startling, something that is not to be found in Ezekiel or in Psalm 23. The Good Shepherd shows the true power of love by absorbing all the oppositional power the world has to offer in the most loving act imaginable: giving one's whole life for the weak.

So this past week, I received some “fan mail” in my email inbox. The writer recommended, in no uncertain terms, that I stick to saving souls and not worry so much about racism. After much thought and prayer, I replied “I would love to engage you in a conversation about this, and in the meantime let me say this: At St. Martin’s this is really not an either/or between saving souls and fighting racism. In fact, saved souls love their neighbors. Saved souls love their neighbors and seek to protect them from the powerful, uncaring forces that violate them.”

Those of us who are saved by the Good Shepherd, saved by his laying down his life for us, are saved to a very particular life, in the model of the Good Shepherd. When George Floyd's life was taken from him, when he was laid down against his will and murdered, those who understand the message of the Good Shepherd stood up, and we put ourselves between the murdering power of state violence and those most exposed to that violence.

We followed the leadership of those who are really most threatened, so to intervene and disrupt a world designed to make more and more victims. Peacefully, we stood up. Boldly, we stood up, in the power of the one who laid himself down, to say “no” to more victimizing and say “yes” to the victory of the one who has defeated every victimizing and every wolfish power in ourselves and in the world. Amen.
Video, photographs, and graphics by the Church of St. Martin-in-the-Fields. Episcopal Church of St. Martin-in-the-Fields, 8000 St. Martin's Lane, Philadelphia, PA 19118. 215.247.7466. https://www.stmartinec.org