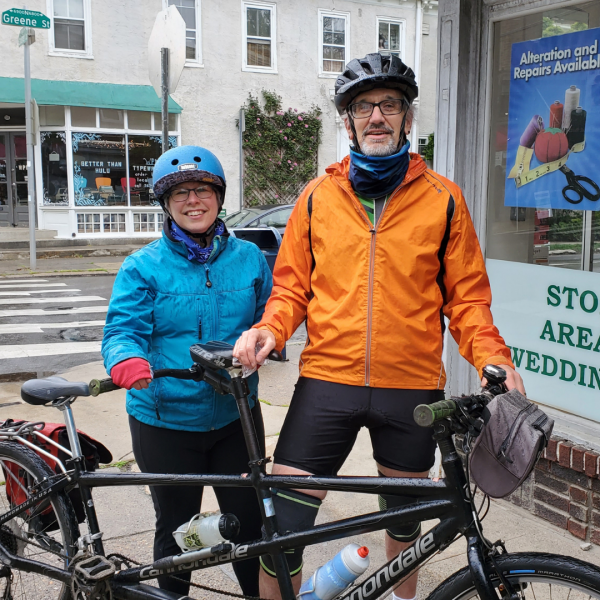 The forecast on Mother’s Day promised drizzle, and the temperature was colder than usual for spring. Oh boy, I thought, classic Ballenger biking conditions!

Last Sunday we joined several other cyclists for a Philadelphia-based ride along the Schuylkill River Trail. It was the kick-off ride for Pennsylvania Interfaith Power & Light’s (PA IPL) Cycling for a Cleaner Future event, which includes a promise to ride 100 miles over three weeks, raise money for this great state-wide climate justice organization, and to advocate for policies that combat climate change. Several riders from St. Martin’s Climate Action Team are participating. You can learn more and sponsor us here.

Jess and I have been riding our tandem on short and long rides since we purchased it eleven years ago for our “tandem anniversary”, celebrating 20 years of marriage. To mark the occasion, we took a 30-mile ride to a bed and breakfast in central PA, through rain, wind, and a harrowing highway crossing in the dark. Not every ride has been that challenging, but there’s something about wet pavement and a wind chill that evokes the thrill of that first biking challenge together.

As Jess likes to say, wherever your relationship is going, a tandem will get you there faster. I like to think that the art of riding a tandem bike is a lot like ballroom dancing. You learn to move with your partner, to anticipate turns and follow a lead. It takes some practice and a will to learn together. Along the way the effort hones the trust required for a relationship marked by synchronicity and solidarity and mutuality. And it gets you places.

As part of PA IPL’s 2021 bike rides, Jess and I will be taking out the tandem weekly, and I’ll be adding to my miles by biking to work at St. Martin’s during the week. Look for reflections from other St. Martin’s riders over the next three weeks. Pray for us, sponsor us, and join us in the ongoing work of climate justice and care.