What a joy and what a challenge it is for me to be with the community which is St. Martin-in-the-Fields!

My joy is nourished and guided by your evident and growing joy at being that community—flux and fluidity and all—into which God’s Spirit has placed us in this moment.

My challenge—my own challenge as a priest and as a human being—is to live into this community as fully as I can, to lean heavily on the Holy Spirit (which is very much the breath that inhabits St. Martin’s in this time), to embrace and hold fast the company of so many of you, staff and laity alike, whose considerable gifts are being manifest into the community as the leadings and offerings of God with us, to trust entirely in the knowledge that our work together and our growth together is God’s work, and finally to understand that in the fulness of God, there is indeed joy forever more.

I once had another excellent Rector’s Warden (Barbara is not the first I have been gifted with: she’s in great company!) who told me on every possible occasion, and in every moment of challenge, just this one thing: Rejoice! It was her mantra. It is mine. I pray it is yours, and will always be, even and especially in the middle of the very hard places in which we find ourselves as a nation, as a community, and as individual children of God. Rejoice!

And like the word “love,” rejoice is also a verb. It requires attention and most of all careful action.

Two things I ask of you this week: first to pray your way into your own most authentic space and linger there with the Holy One, full of tears and pain if need be, full of anxiety if that be the case, full of hope if that be so. I promise that if you linger there with God, God will be there with you, and there will come to you, not as a replacement but as a companion, an almost unimaginable fulness of joy.

Out of those two things, any of us and are all of us equipped to meet even the most ferocious challenges that abound in our lives, our community, and our fractured and tenuous nation and world.

On this Fourth of July, when we commemorate the rockets red glare and the bombs bursting in air that helped achieve the fragile beginnings of freedom for some of us, let’s remember how wide is God’s grace and power, how far we have come from the place in which even as those rockets and bombs were exploding they were being made by enslaved people living imprisoned in brutal, lead-filled chambers and fields; and knowing that, let’s keep on freedom’s trail with a banner that says “Rejoice!” 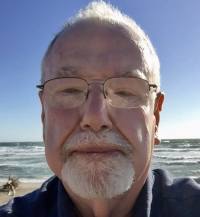 
The Rev. James H. Littrell (Jim) will serve at St. Martin's to preside at Sunday services on a transitional basis in summer 2022.