Saints of Color Who Inspire Our Ministries: Rev. Pauli Murray 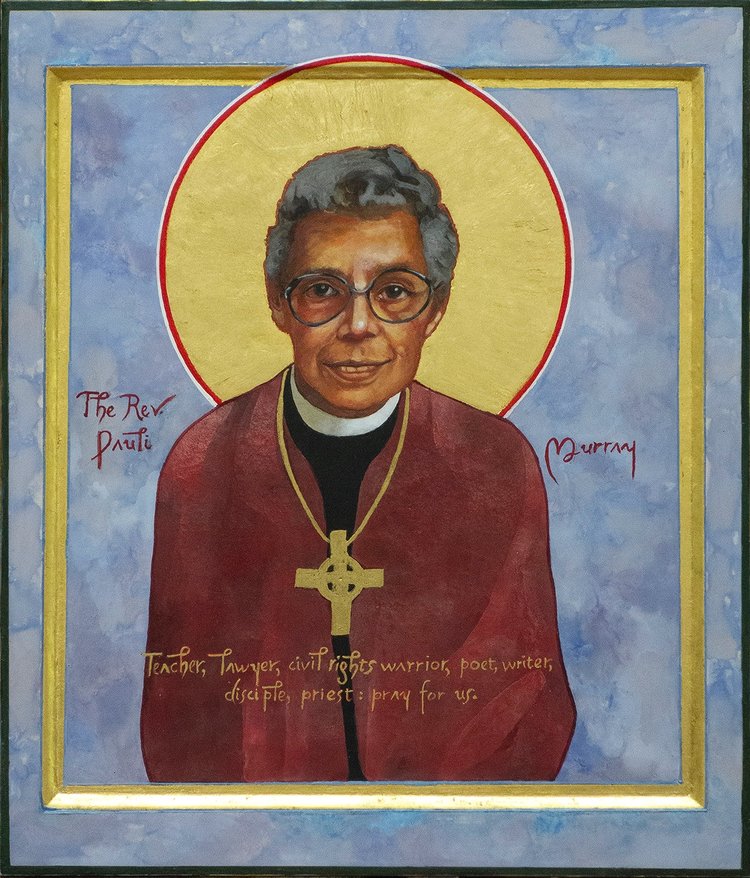 We continue our wonderful celebration of Black History Month with this week's reflection on the Rev. Pauli Murray by the Rev. Barb Ballenger.


I was first introduced to the details of the Rev. Pauli Murray’s life in 2018, when my husband gave me her autobiography “Song in a Weary Throat” for Christmas. In her I found a mentor to help me regard my own life and my long, 25-year-walk toward priesthood.

From her birth in 1910 to her death in 1985, Pauli Murray embodied insistent hope, challenging every barrier that she encountered as a black woman, growing up in the Jim Crow south and coming of age in the racist north. For me she is a saint who helps me walk through the door of the world’s Not Yet into God’s Now.

Pauli Murray did this by pushing on every door that tried to get in the way of everything God created her to be: a poet, a lawyer, a change agent, an academic and at the end of her life an Episcopal Priest – the first African American woman priest in our denomination. In each of these identities, she ran up against the Not Yet of our society. In each of these, God’s Now beckoned her from the other side.

And so as a black woman coming of age in the Great Depression, Pauli Murray found herself at the threshold of every change our country saw in Civil Rights and Women’s rights in the mid-20th century. I firmly believe that those justice movements, still in progress, are God’s desired Now for the world.

Pauli Murray called the twin inequalities of racism and sexism Jim Crow and Jane Crow. Her legal strategies, developed in law school, were used to help overturn the separate but equal clause. As a civil rights warrior, she occupied all-white bus seats and segregated lunch counters more than a decade before Rosa Parks and Martin Luther King led similar efforts. And speaking of God’s Now, Pauli Murray co-founded the National Organization of Women.

In 1977 she was in the first official class of women to be ordained to the Episcopal Priesthood, right on the heels of those renegade women and bishops who successfully pushed against the church’s Not Yet when it came to women’s ordination.

Pauli Murray wrote several autobiographical works, but she barely had words to discuss the contours of her sexual identity and her gender. Today she would have been much more free to understand herself as trans-gender, to identify as male, something only hinted at in her writing. That’s one more door that God’s Now has opened to something longed-for in Pauli Murray’s personal identity.

Pauli said Now to those things, with a bone shaking force. And while Not Yet was often the prevailing answer, she put her shoulder against the door, along with so many others, while looking for other weaknesses in the structure.

And that’s why I chose Pauli Murray to be my patron saint, my intercessor and witness, when I was making the final walk to my priesthood in December of 2019. I had first named that call to the priesthood while I was working in the Catholic church and studying Catholic lay ministry 25 years before. But the Catholic Church doesn’t ordain women. It took me nearly two decades to take the first steps toward that call to ordination by leaving the Catholic Church and becoming an Episcopalian.

When I discovered Pauli Murray’s story I found a touch-stone, a role model, a reminder of the work of pushing and pushing against the door between our Not Yet and God’ Now.

When I was ordained a transitional deacon in June of 2019, Rev. Carol Duncan commissioned an icon of Pauli Murray, created by local artist Bettina Clowney, who has since died. When we are doing anti-racism work at St. Martin’s, the icon sits on a special stand during our workshops, to remind us of the force and power of the saints who stand on the side of door with God, in the realm of God’s NOW.

Otherwise it hangs in my office in front of my desk, where I can gaze into her eyes and find strength for my own impatient soul. Her life as an African American woman ever opens my eyes to the Not Yet to which my formation as a white person has often blinded me. Her witness points me to where the door to God’s Now lies. Her priesthood shows me where to put my shoulder.

And on those days when the door seems impossibly stuck, I look into those wise and weary eyes and know that St. Pauli Murray is praying for me.

(Note: this essay is adapted from a sermon that Rev. Barb preached at Grace Epiphany Church on Nov. 3 of 2019, a month before she was ordained a priest.)

Here is short video produced by PBS that discusses Murray’s life, including her gender identity (Suitable for grades 6 and up)

The feature-length documentary My Name is Pauli Murray is streaming on Amazon Prime. Here’s a trailer. (Suitable for grades 9 and up)

Pre-order Pauli Murray: Shouting for the Rights of All People by Deborah Nelson Linck, a paperback for children ages 6 to 12. It will be released May 17 and can be pre-ordered through Amazon.

Liberating God, we thank you for the steadfast courage of your servant Pauli Murray, who fought long and well: Unshackle us from the chains of prejudice and fear, that we may show forth the reconciling love and true freedom which you revealed in your Son our Savior Jesus Christ; who lives and reigns with you and the Holy Spirit, one God, now and for ever. Amen.