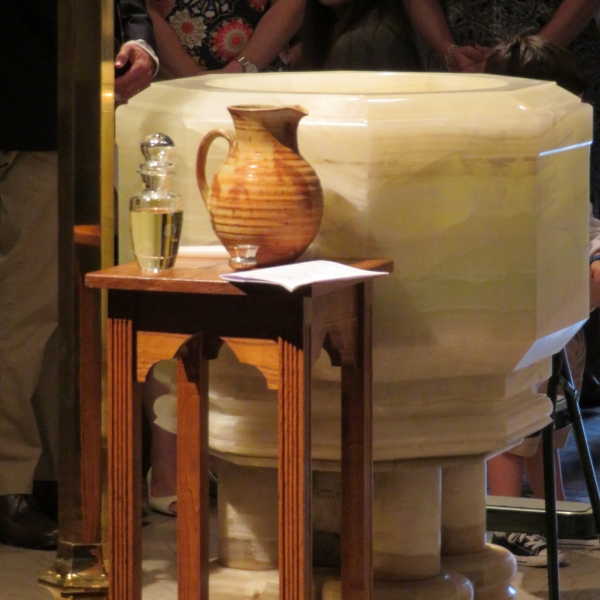 Baptism doesn’t have to happen in infancy. Some people are raised in faith traditions that baptize when a child or adult can request it for themselves. Some families come to Christian practice later in life and enter the Christian family with baptism of one or more family members together.

In the case of infants, baptismal preparation at St. Martin’s involves an educational session for parents and godparents that reviews the baptismal liturgy while discussing the beliefs behind the ritual. When older children or adults are being baptized, we have that conversation directly with them. You can learn more about the Sacrament of Baptism and review the liturgy itself in the Book of Common Prayer, which contains the formal liturgies and prayers used in the Episcopal Church (and much more!). Find it online at BCPonline.org.

Baptism can be scheduled at the family’s convenience, though we do not Baptize during the penitential season of Lent. The Easter Vigil, which is the night before Easter, is a celebration that the church particularly reserves to welcome new members into the church through the Sacraments of Baptism or Confirmation. Folded within this dynamic night liturgy, these sacraments take on an almost mystical quality in the context of the celebration of Jesus’ joyous resurrection.

In fact, that’s one reason that baptism is most appropriately celebrated during a Sunday Eucharist. This allows the sacrament to find its place in the larger story of salvation. It also allows the wider parish community to make their own vows to support the faith of the baptized, while witnessing and celebrating their special day. During this time of pandemic and social distancing, however, we have been offering small baptisms for immediately family members, where one or two parishioners attend to represent the church. We wear masks, keep appropriate distancing, and Zoom in family members and godparents who might not be able to make it in person.

No matter when Baptism is celebrated, it’s a particularly joyous time for the church as we welcome new members to the life of Christ. Please contact Rev. Barb or Rev. Jarrett if you would like to arrange a baptism for a family member.

The Rev. Jarrett Kerbel was educated at Northwestern University, the University of Chicago and Union Theological Seminary in New York City. He was ordained Priest in 1995 in Danville, Pennsylvania where he worked as a Hospital Chaplain and a Head Start teacher. Pastoral positions followed at the Church of St. John the Evangelist in Flossmoor, Illinois, St. Paul and the Redeemer in Chicago, and then Rector at St. Mary’s Episcopal Church in Park Ridge, Illinois. After following his wife, the Rev. Dr. Alison Boden, to her new position in Princeton, New Jersey, he was called to be the Executive Director of the Crisis Ministry of Mercer County. The largest food pantry and the gateway agency for Homelessness Prevention services in Mercer County, the Crisis Ministry also runs a Welfare to Work program and an innovative free farmers market. Jarrett became Rector of St. Martin’s in February 2011. He formerly served as the co-chair of Philadelphians Organized to Witness Empower and Rebuild (POWER). Jarrett serves as Dean of the Wissahickon Deanery and is an Associate of the Order of the Holy Cross. He is an Adjunct Professor at Princeton Theological Seminary where he co-teaches a regular class on Faith Based Community Organizing, Theology and Practice. Jarrett has been published in Sojourners, the Huffington Post, Yours the Power, and the Journal of Public Theology. He is the father of two children, Timothy and Martha.

Join Wellspring team member Susan Cole for prayerful contemplation of consoling passages from Isaiah at 7 p.m. on Thursdays from Jan. 7 through Jan. 21. The sessions will be held on Zoom. Register here.