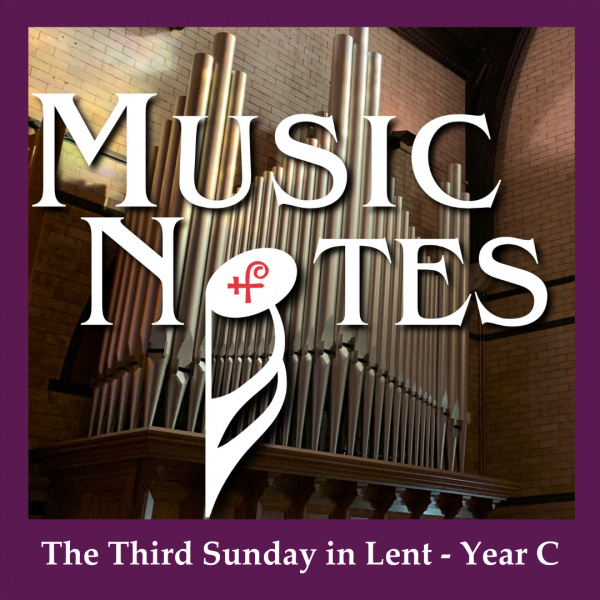 Welcome to the Third Sunday in Lent! This Sunday sees us continue our series of preludes by female composers with British composer Emma Louise Ashford, and our worship will feature beautiful polyphonic music from Italian and British Renaissance composers. The music’s character reflects this week’s scripture’s emphasis on repentance, reflecting the core message that not only does God refuse to abandon us, He chooses to attend to us even in our ‘trespasses’.

“Of the women of our city, some have distinguished themselves in literature and some in art, but in the realm of musical composition, there is one name that stands pre-eminent. It is the name of Mrs. Emma L. Ashford.”

These words from the then Dean of Vanderbilt University, Dean Herbert Tolman, describe the composer of this Sunday’s prelude, Lead Kindly Light. Emma Louise Ashford (1850-1930), of English heritage, was born not far from Philadelphia in Newark, Delaware. Somewhat a child prodigy, Ashford gained her first organist job aged 12 at the Episcopal Church in Kewanee, Illinois. She and her family moved often, and she held posts in Connecticut, Chicago, before settling with her English husband in Nashville.

Ashford continued to travel, performing and conducting her 600+ works which vary from organ preludes to hymns, cantatas to song cycles. In 1901, she wrote “Vanderbilt Ode” for the 25th anniversary of the university.

The same year saw Ashford write Lead Kindly Light. A simple meditation on the famous hymn tune Lux Benigna by British hymn writer and clergyman, John Bacchus Dykes (1823-1876). Listen how the melody moves in register between the higher and lower parts of the musical texture, and how the harmonic progressions around the melody change.

Regarded as one of the best model examples of Renaissance polyphony (music written with 2 or more independent lines), our Offertory motet, Sicut Cervus is from the prolific output of the excellently named Giovanni Pierluigi da Palestrina (c. 1525-1594). Polyphonic music was not de rigueur in Italy at the time, and Palestrina was greatly influenced by two French musicians that spent much of their careers in Italy, Guillaume Dufay (c. 1397-1474), and Josquin des Prez (c. 1450/1455-1521). Palestrina would become one of the first Italian masters of polyphony. The pinnacle of Palestrina’s career would come in 1551 when Pope Julius III (previously the Bishop of Palestrina) appointed the composer maestro di cappella of the Cappella Giulia, the choir of the chapter of canons at St. Peter's Basilica in the Vatican City.

Sicut Cervus is unparalleled in its pure polyphonic style. The work was first published posthumously in 1604, in a sequel compendium to the 1564 Motecta festorum (Tr. Festival Motets). The piece was described by record label Collegium Records in 2009 as to have a “serene but fervent spiritual yearning”.

It is easy to get lost when listening (and indeed singing!) such music. Try to listen for how one melody appears in one choir section and is “passed” to the next, from tenor, to alto, to soprano, to bass, etc. Palestrina also begins a tradition of “word-painting”, personifying the text by musical means. For example, listen to the faster paced section around the word desiderat expressing “longing”, and the rising of the melody to its peak around fontes or “fountains”.

Fun Fact: Today we usually see choral music laid out in 4 parts: soprano, alto, tenor, and bass, and all singers are able to see the music of other sections. However, at the time, it was very likely (due to the hand-copying of music) that musicians would only see their part (similar to that of an orchestra). This meant that singers became very proficient at counting rests!

Imagine being such a fine composer that a musical example from your 1597 publication A Plain and Easy Introduction to Practical Music would become one of your best-known compositions?! Well, that’s what happened for Thomas Morley(c. 1557-1602). Within this treatise, dedicated to the one and only William Byrd (1543-1623), Morley’s Agnus Dei is found.

While this specific Agnus Dei is completely fine for use as a Lenten anthem, it is, alas, not suitable to be used for the Ordinary of the Mass due to a strange quirk… The usual text of an Agnus Dei is: Agnus Dei, qui tollis peccata mundi, miserere nobis. However, in this composition, we find miserere nostri. This small difference boils down to a difference in genitive and dative cases of the language and is not nearly as interesting as the piece itself… (almost, though!).

Fun Fact: One of the most famous musicians in England at the time, Morley, along with Robert Johnson (c. 1583-1633), are the only composers to have set William Shakespeare’s (1564-1616) text to music while the famous playwright was living!