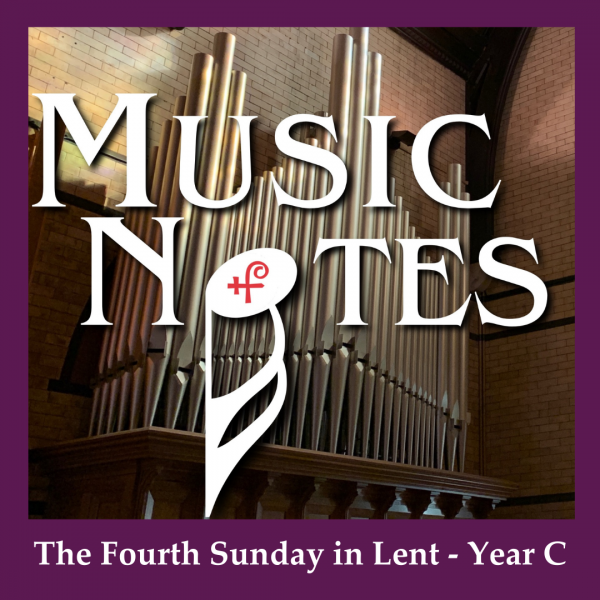 The penultimate Sunday in Lent sees our choral music reflect on the importance of the bread of heaven in our communion motet by César Franck, and connection with Christ through the blessed sacrament of the Eucharist in our Offertory Anthem by Italian composer, Giovanni Croce. Our celebration of works by female-identifying composers as our preludes concludes Women’s History Month with a beautiful work by living composer, Pei-lun Vicky Chang.

Born in Taiwan, Dr. Pei-lun Vicky Chang (b. 1966) is a graduate of the Fu Jen Catholic University in Taipei; the Manhattan School of Music, NYC; and the Cincinnati College-Conservatory of Music, OH. She is currently Music Director at St. John’s Evangelical Lutheran Church, Lancaster, NY.

From her Suite for Organ, Raining Night’s Flowers is a beautiful work in four sections, based on the Taiwanese folk song “Woo-yah-hwui”. In the score, the composer describes her work as follows:

“The piece can be divided into four parts. First, a short introduction, the melody is generated by the first and last phrase of the folk tune, and both are highly ornamented. Second, there is a simple hymnal style, in which the entire folk tune is placed on the soprano line. Third, there is development … the descending triplets passages resembling the raindrops while it modulates into a different key. At the end, it is a trio in canon with a little coda.”

I first discovered her works when looking for those of living composers to perform at the Inaugural Recital of the Organ at Philadelphia Cathedral back in October 2021. You can hear my performance of this piece from that recital by clicking below:

This Sunday sees us continue the trend of Renaissance composers of polyphony with excellent names. This week, Ioanne a Cruce Clodiensis, Zuanne Chiozotto known by his friends as Giovanni Croce (1557-1609) is a Late Renaissance Italian composer of the Venetian school, known particularly for his madrigal writing alongside the likes of Giovanni Gabrieli (c. 1554/1557-1612) and Claudio Monteverdi (1567-1643).

Croce took the position of maestro di cappella at St. Mark’s, Venice in 1603. Famed for its strong choral tradition, the quality of music declined under Croce’s tenure–due to his ill health rather than lack of musicianship! He would die in-post in 1609 to be succeeded eventually by Monteverdi.

Sunday’s Offertory Anthem comes from his 1597 Motetti a 4 voci, libro primo (Tr. Motets in 4 voices, book one) published by the Vincenti press in Venice. From Latin Prose, its text can also be found as an Antiphon to the Magnificat in the Vespers service of Corpus Christi and is believed to be by Thomas Aquinas (1225-1274). O Sacrum Convivium is a profound expression the Eucharistic celebration (the banquet) within the Paschal Mystery:

O sacred banquet!
in which Christ is received,
the memory of his Passion is renewed,
the mind is filled with grace,
and a pledge of future glory to us is given.

Fun Fact: Croce is credited to be one of the first composers to have his works published with figured bass; that is numbers under the bass line to indicate to a keyboard player which chords should be used to accompany the work, marking Basso per sonare nell'organo or “Bass for playing on the organ”.

For many, if you said the name César Franck (1822-1890) to them, they may scratch their heads. However, if you hummed the first few measures of Panis Angelicus, they would undoubtedly recognize the melody if not that it is written by the oft-forgotten, Belgian composer, César Franck. In the year of the 200th anniversary of his birth, Franck is a composer of great importance in Europe, being influenced and influencing some of the greatest composers, while writing some outstanding music himself!

Franck was a somewhat precocious child, being able to play any of the preludes and fugues from the Well-Tempered Clavier by J. S. Bach (1685-1750) by the age of 14, as well as being a contender in our “best names” competition: César Auguste Jean Guillaume Hubert Franck.

Though it is said that this motet is taken from his Mass for Three Voices, Op. 12, (1860) the Panis Angelicus was finished 12 years later and was a late addition to the whole work. The text is another by Thomas Aquinas, also written for Corpus Christi, and is taken from the penultimate stanza of his Sacris solemniis. This well-known work demonstrates Franck’s innate ability in composition and melodic development.