​Majidah Dahan Is a U.S. Citizen! 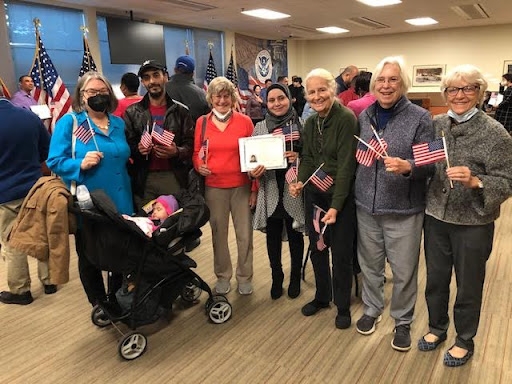 On October 20, after hours of studying in English and Arabic and having passed her written test, Majidah became a naturalized citizen of the United States. Majidah and her husband (Sameer) fled from their home in Syria to Jordan during Syria’s Civil War and came to the U.S. with their two children (son Ayman and daughter Iman) as refugees in December 2016. Members of the Refugee Resettlement Ministry (RRM) of St. Martin’s and others helped them move into a temporary home, beginning a long journey of collaborating with the Dahans in their efforts to put down roots in a new country while maintaining their own culture and faith.
The Dahans spoke no English and arrived with some significant, ongoing family health challenges; none of the RRM members spoke Arabic. (Google Translate was quickly outed as a fairly useless albeit amusing “tool”.) Partnering with a refugee family requires a tremendous amount of logistical help but yields unexpected rewards for everyone involved. As RRM members began working with the Dahans to help them learn English; hunt for an affordable apartment, a nearby mosque, and schools for their children; find a job for Sameer; navigate our complex health care system and the bureaucracy surrounding Social Security benefits; and figure out transportation (RRM members taught Majidah and Sameer to drive in Philadelphia), friendships began to flower and everyone’s particular skills became apparent and were put into use. Majidah and Sameer have been unfailingly gracious despite facing so many challenges in a foreign language and culture. They have provided many exceedingly generous, delicious meals along the way; they have maintained their halal diet, and RRM members have been treated to wonderful dishes. They have included us in birthday parties and celebrations of Eid and have been patient teachers whenever we attempted to learn some Arabic. We have loved getting to know them all and watching their children grow; their daughter Eeleen was born last November.
Majidah was 25 when she came here, laughing at our “convenient” dishwashers, planting lettuce from saved leftover salad stems, showing me edible berries on the way to a health appointment. As I’ve said so many times when handed a plate of fabulous tabouleh, pilaf, and shwarma: “Shukran (Thank you), Majidah.” And always her gracious reply: “Afwan (You’re welcome).”