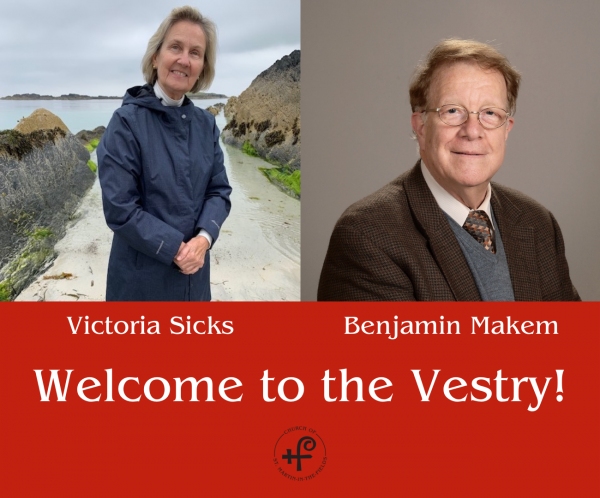 Congratulations to Benjamin Makem and Victoria Sicks, who were elected this week to join the Vestry Class of 2023, serving abridged terms. Ben and Victoria are both long-time members of St. Martin's who have been active in the community in numerous roles. Read more about them below:


Ben is a native Philadelphian and has lived in SW Germantown for over 30 years. He worked as a branch manager for several local banks for twenty-five years.

At age fifty he made a career change, obtaining a Masters in Social Work from Widener University. He then worked for the Philadelphia Corporation for Aging for sixteen years as a case manager supervisor, retiring in 2016.

Ben was received into the Episcopal Church at St. Luke's, Germantown, October 18, 1979. He became acquainted with St. Martin's over ten years ago when he started Education for Ministry and completed two years. He then became active with Steven Ministry and except for a year off continues with this ministry. Ben is currently in the third year of Education for Ministry. He moved from being acquainted with, to membership in St. Martin's in March 2017. In addition to the above, he serves as Lector and Intercessor at the 8:00 am Service.

Ben also counts on Mondays, on a rotational basis, the Sunday collection. Ben has a strong interest in all aspects of railroading and is a member of several railroad historical societies. He's an avid reader of history with a special interest in the English Reformation. He is also a recent member of the Historical Society of the Episcopal Church.

Victoria was born in Duluth, Minnesota, and knew God would never abandon her from age 7. Sitting in the 3rd pew, pulpit side, with her parents, she felt supported in a way that she has rarely questioned. Her parents ended their lives here in Philadelphia and are in the Columbarium.

She came to St. Martins in 1981, first by herself bringing the children, and then with her then husband, Jim. Her children are Catherine, 44 and Will, 40. Both of them live in Philadelphia, for which she is always grateful.

She has had several “careers,” most recently as a development officer. She retired in June 2021.

At St. Martin's Victoria has taught church school, re-established the Altar Guild, served on the Vestry, worked on the renovations and capital campaign in the late 90’s and early 2000’s, and led Hospitality.

Her current real interest and concern for St. Martins, the wider church, and our country is the issue of systemic racism. She serves on the Becoming Beloved Community Commission. She served for 6 years on the Diocesan Anti-racism Commission and organized two anti-racism trainings.

She is a member of the Society of the Companions of the Holy Cross and currently leads the Philadelphia Chapter.

That is one side of her. The other side feels the strong pull of her Italian heritage. She speaks fluent Italian, studies it, and is applying for Italian citizenship, and she is long overdue for a trip there!

The Vestry is the lay leadership of the church -- get to know who makes up the Vestry here. We also feature the delegates to our upcoming Diocesan Convention.