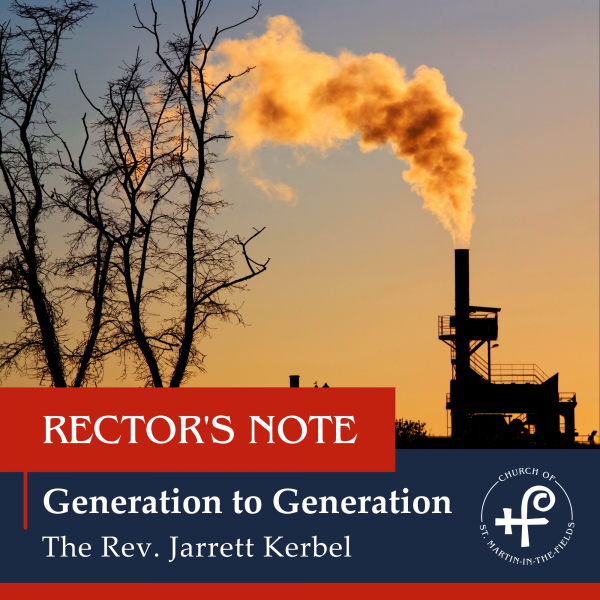 As we emerge from the hottest summer ever recorded and look forward to the cool breezes of the Fall, my thoughts turn to the future of our planet. Year after year, we are breaking records for global temperature and we are seeing the effects through out-of-control forest fires in the West, more frequent and more powerful hurricanes in the Gulf of Mexico and along the eastern seaboard, and overtaxed electric grids. Who is considering the needs of future generations? How do we count those needs in our decision making today?

In a wonderful book called The Ministry for the Future, Kim Stanley Robinson imagines a future where humans have learned the hard lessons of climate disruption and have created new political structures to reign in our worst short-term thinking. The title of the book describes the creative response: a “Ministry for the Future” is formed with the task of representing the interests of future generations in every decision making process. Why leave the interests of future generations to chance when we know that they will have an interest in a sustainable environment and the conditions necessary to live?

Of course, the Haudenosaunee (Iroquois) had this principle in place long before the industrial revolution began to threaten our planetary health. The “seventh generation” philosophy holds that decisions we make today should result in a sustainable world seven generations in the future. The Haudenosaunee Confederacy wrote the seventh generation principle into their governing documents well before 1500 CE, the same documents so admired by Benjamin Franklin and now understood to have influenced the US Constitution. What if our founders had included the concerns of future generations in our constitution as a political interest worthy of standing, respect and representation?

All who have children, grandchildren, nieces and nephews, god-children and step-children know what it means to think ahead, to project a future for the next generation, to worry and to plan for their needs even before each generation is born. We have intimate knowledge of our moral calling in relation to future generations on an immediate, family scale. What is needed is for us to draw the circle of love and concern around every generation to come, no matter where they are born. This is the calling of our Christian Faith which constantly challenges us to balance our family love, our individual love and our neighborly love. When we follow Jesus into love of neighbor and love of self, we will discover we all share a common interest in the future good of our planet.