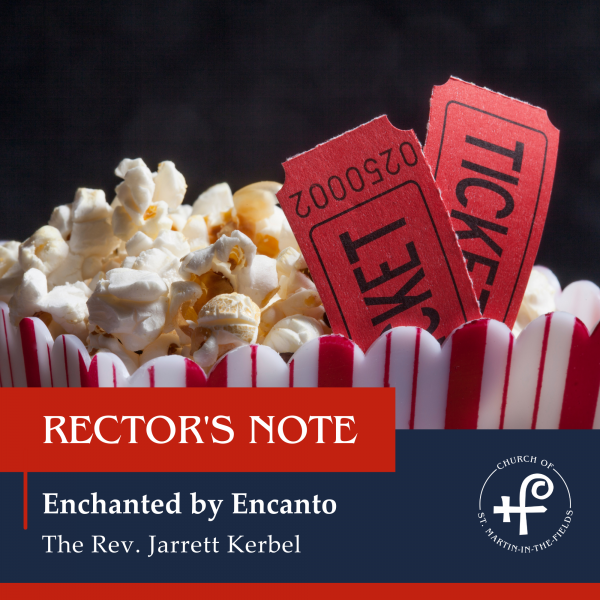 My wife Alison and I spent Easter evening feasting on take-out Thai food while sitting on the couch watching “Encanto” on my laptop. I was instantly enchanted by the animated film from Disney. My heart swelled, tears flowed and Easter joy found an unexpected boost from Disney magic.

Encanto is the story of the magically gifted Madrigal family. As with many Disney films, an early trauma has gifted this family with magical powers which they use to protect the town where they are the principal family among fellow refugees. One grandchild has the gift of perfection. Another has the gift of superhuman strength. One can speak to the animals and so on. The Madrigal home is itself a magical creature that represents the family mission and ideals.

Then there is Bruno. We don’t talk about Bruno. Why? Because Bruno has the gift of prophecy and in one vision he sees the collapse of the family home. Disturbing or questioning the family is not allowed so he is cast out, exiled from the family, and his name is not to be mentioned.

Encanto is a perfect parable of multi-generational family systems. Families are deeply formed and deformed by trauma and stress. From these originating events come gifts and deficits, strengths and fragility that are passed down across generations. In the case of Encanto, the spoken and unspoken family norms ruled out curiosity about or discussion of the original trauma. Discussion of any weakness at all was forbidden. Shutting down all curiosity behind a firm wall of authority and fear, Abuela (grandmother) functions as the gatekeeper imposing a rigid structure to preserve the system from all anxiety and any perceived threat. Bruno is exiled to preserve the status quo even while those who follow the family pattern suffer under the burdens of perfection and overfunctioning it imposes on them.

The Rector's Note is a blog of weekly reflections by the Rev. Jarrett Kerbel.

Read and reflect each week with Jarrett. On occasion, we have a second post or a guest post that runs in the Recto…