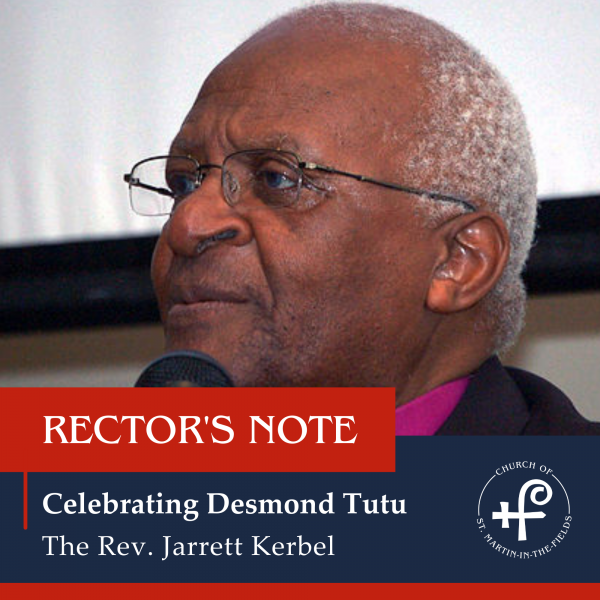 On a Sunday walk, my wife recalled some wonderful stories about Archbishop Desmond Tutu. As a young child, the future Archbishop learned that the church could be a source of social change and not just an instrument of oppression. Tutu and his mother were walking on a sidewalk one day when a tall white man approached on the sidewalk from the opposite direction. In apartheid South Africa white supremacy dictated that the black mother and child should step off the sidewalk to let the white man pass without having to acknowledge them. So Tutu was shocked when the white man stepped into the street and doffed his hat to his mother as he passed them.The tall white man was wearing a black suit and a clerical collar and the young Tutu regained a modicum of trust in the church as witness to justice.
The other story my wife Alison related is from the height of the Anti-Apartheid struggle. Alison visited the church in Soweto where this happened and passed along the story to me. Tutu and a group of ecumenical clergy were holding a prayer meeting to protest the white supremacist government of South Africa. The South African Defense Forces—large, white, heavily armed Afrikaners—surrounded the church and intimidated the clergy and laity. Indeed, a group of armed soldiers surrounded the lectern where Tutu was leading prayers—stomping in heavy boats, banging rifle butts on the floor, looming over Tutu as he prayed. One soldier raised his rifle and brought the butt down on the wooden lectern breaking off a large chunk. Tutu continued to pray.
I celebrate the life of Desmond Tutu, a Saint. His courage, humor, endurance, faithfulness, grace and truth shined with the light of God in our generation. May we be blessed to learn from him and follow him into the virtues that serve the vision of God's goodness in our world.