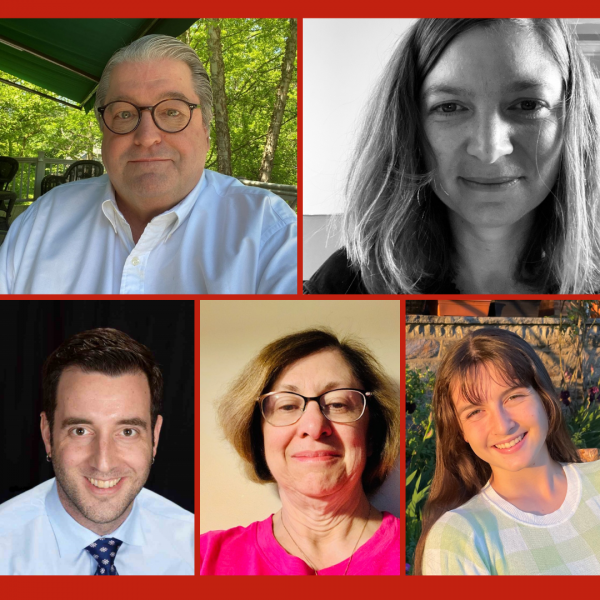 Each year in June, St. Martin's elects new vestry members and new lay delegates to Diocesan Convention at Annual Meeting. This year, Annual Meeting takes place on Sunday, June 13, 2021. Due to restrictions on in-person gathering, the meeting will be held online in a Zoom conference following Choral Eucharist at 12:00 p.m. More information about Annual Meeting can be found below.


Vestry members form the lay governing body of the church. The basic responsibilities of the vestry are to prayerfully "help define and articulate the mission of the congregation; to support the church's mission by word and deed, to select the rector, to ensure effective organization and planning, and to manage resources and finances.*" Vestry members serve for a four-year term and are allowed to hold up to two consecutive terms.

This year our four nominees comprise four new vestry members and one new Youth Delegate. Please read more about all five nominees below.

David Dieck is standing for a return term of vestry service having rotated off in 2007 after eight years of service, five as Rector’s Warden. David and his wife Eugenie have been members of St. Martin’s since 1989, enjoying decades of engagement in various ministries of the parish. They live in Lafayette Hill and maintain an apartment in Washington, DC, where Eugenie is on the leadership team of Georgetown University. Their two sons were fixtures at St. Martin’s during their time in the undercroft (for Church School). Now grown, Andrew lives in Mt. Airy and is pursuing a career in energy management. Brendan is a middle-school teacher in a charter school in Boston. David just retired from a long career in railroad management and is enjoying the pursuit of many interests close to his heart.

Elizabeth lives in Wyndmoor with her husband, Mike, and daughters, Charlotte (9) and Claire (6). The Eagles Family have been parishioners at St. Martin’s since moving to the area in 2016. Elizabeth cares deeply about St. Martin’s social justice mission and has been a member of its POWER local organizing committee since its inception. A graduate of the University of Virginia and Temple Law School, Elizabeth practiced law for several years before deciding to stay home to raise her girls full time. She has remained active in her community, serving on the boards of the Christ Church Preservation Trust and Horseways, an equestrian trail preservation group. She is also a dedicated volunteer with Turn PA Blue.

Rob Jennings is a deep-sea evolutionary biologist, and a professor at Temple University. A life-long Episcopalian, Rob has from a young age valued the Church’s invitation to conversation about the complexities and challenges of living into our calling as Christians, and how the Church doesn’t just accept questions and dialogue, but actively encourages them. The intersection of his professional and spiritual lives has made him passionate about the ways in which science and religion can each deepen our understanding of the other. Having sung for almost as long as he could talk, Rob loves singing in the St. Martin’s choir and the ways in which making music together deepens our participation in and understanding of worship. He also loves cooking for crowds large and small, and has made several pots of soup for the SUPPER ministry. He is honored to have been nominated to serve on the vestry.

Paula and her husband, John, joined St. Martin’s thirty years ago when their son was a toddler. Paula enjoys the reverent liturgy, transcendent music, and the mission of our church to “strive for justice and peace among all people and respect the dignity of every human being.” Over the years, Paula has served on the Altar Guild, as a lector, and most recently as a member of the advisory committee for our new director of music. In 2008 and 2009, she participated in medical mission trips to our companion parish in Guatemala, which was an eye-opening experience.

Paula practiced as a physician for 26 years, and then worked for 10 years on behalf of hospitals appealing medical claims that were denied payment. In 2019 she retired, but hopes that her time and talents will be of service to the St. Martin’s community.

With her earliest years of church being in Barbara Baumgartner’s Sunday morning class, Sophie has been connected with St. Martin’s her whole life. Through her years in children’s choir, as acolyte, and member a of the high school youth, she’s always enjoyed St. Martin's lively community and loving spirit. Outside of church, Sophie is a rising Junior at Abington Friends School and loves monopoly, dark chocolate, and her cat, Charlie.

Our Diocesan Convention lay delegates are elected to serve for one year only. This year's nominees will attend and vote on behalf of the parish at the Annual Convention for the Episcopal Diocese of Pennsylvania, usually held in the fall. Our full delegation to convention includes both our elected lay delegates and all the canonically resident clergy associated with our parish.

Convention recently approved extending the one-person, one-vote policy for clergy within the diocese to the lay representatives as well. Previously, our lay delegation would have to choose to vote as one body. Our delegates will review both the ministry and finances of the entire diocese and vote on the annual budget and various resolutions during the two-day convention. You can learn more by reading the recap of the 2020 convention.

This year our lay delegates include two returning members (Carolyn Green and Lorraine Webb) and one new member (Melissa Buckingham). Please read about them below.

Melissa began attending St. Martin’s in 1983 and was confirmed in the Episcopal Church by Lyman Ogilvy in 1985. She has been a pledging member since then, and has served on the vestry, was a lay liturgist for 11 years, and served on various committees including stewardship and adult education. She is a graduate of the Education for Ministry (EfM) program, and mentored/co-mentored the EfM group at St. Martin’s for 17 years.

Melissa served as a delegate from St. Martin’s to Diocesan Convention twice previously, most recently five years ago.

Melissa is a retired librarian, having worked at the Free Library of Philadelphia as an adult services librarian for 25 years, and she served two terms on the board of her professional association, the Public Library Association.

Carolyn Green is founder and Managing Partner of EnerGreen Capital Management, LLC, an investment firm focusing on late venture and growth stage companies in the energy and environmental industries. Prior to founding EnerGreen, Ms. Green was Vice President - Health, Environment, and Safety for Sunoco, Inc. She has over 35 years of environmental and energy experience and has been a passionate advocate for ensuring that low income and ethnic communities have a seat at the table when energy and environmental decisions are made.

Carolyn and her husband, Michael Blakeney, have been members of St. Martin’s since 2002. She served on St. Martin’s Vestry from 2005-2008 and chaired the Outreach Committee. Most Sundays Carolyn can be found singing in St. Martin’s choir and occasionally playing the recorder. She currently is a member of the Chapter for the Philadelphia Episcopal Cathedral, where she serves on the Finance Committee. Carolyn says that participating in diocesan events on behalf of the Chapter has made her increasingly aware of how decisions made at diocesan levels directly affect individual parishes. She looks forward to again representing St. Martin’s at the Diocesan Convention.

Lorraine Webb is a human resources executive who recently retired as Vice President of Human Resources for Philadelphia Gas Works. In that role, she had oversight for all human resources and organizational development activities ranging from talent and leadership development to benefits, compensation, employee relations, and recruitment.

Although retired, Lorraine has joyfully moved into what she calls her ‘second act’—that of coaching. As a coach, she focuses on helping people—emerging leaders, professionals, and executives, alike—develop the skills necessary to meet their personal and professional goals. She is president of LSWEBB Coaching and Consulting. As part of her commitment to be of service, Lorraine recently co-created a virtual community for women to meet bi-monthly to discuss topics revolving around hope, resiliency, and balance in response to the conditions of the world today.

Lorraine is a graduate of Binghamton University. She is certified in Presence Based Coaching, and is a member of International Federation of Coaches and the Society of Human Resources.

Lorraine has one daughter who is married and lives in Allentown.

Election will take place ahead of our Annual Meeting on Sunday, June 13, 2021 on Zoom. Voting Members** will be emailed a ballot by 9:00 a.m. on Monday, June 7, 2021 and voting will end at 12:00 p.m. on Friday, June 11, 2021. Official election results will be announced during the meeting on Sunday, June 13, 2021. Annual meeting is taking place live on Zoom. Registration will get you the Zoom link while allowing us to safely gather without disruption. 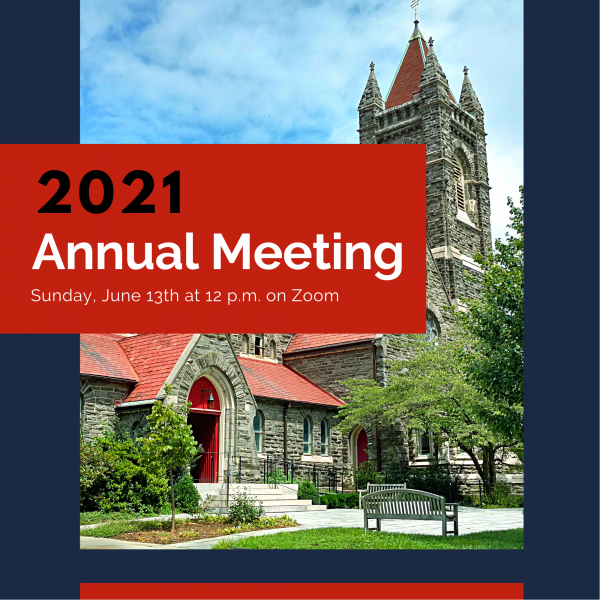 13Jun
Sunday, Jun 13, 2021, 12:00 PM
Join in to celebrate the reimagining and resiliency of our community over the past year, discuss plans for how we will continue to reopen the property in the fall, and confirm our Vestry and Diocesan Convention delegate voting*. You won't want to...
Details

*Quote from Episcopal Church glossary for the term, "Vestry".

Did not receive an emailed ballot on Monday, June 7, 2021? Please email Natalee Hill.

Associate for Communications and Administration

Prior to St. Martin’s Natalee Hill (she/her) worked for the Theatre Alliance of Greater Philadelphia for nearly eight years, starting as the Administrative Intern and moving up most recently to Communications Manager. Natalee is a graduate of Muhlenberg College in Allentown, PA from which she graduated in 2003 with a Bachelor of Arts in Theatre with concentrations in Stage Management and Performance. There, she worked as a Stage Manager for both college productions and the professional Summer Music Theater, and also held a work-study position assisting the Director of Marketing & Development in the Department of Theatre & Dance.

Natalee grew up in Connecticut a member of the UCC, where she was an active member in her church, participating in the choirs, Youth Fellowship, and teaching at Vacation Bible School and for Sunday School. In 2003, upon moving to the Philadelphia area for work, Natalee joined a United Methodist Church. There she sang with the church choirs and volunteered with the youth program. In 2006, Natalee and her husband took over the Youth Director position part-time. They led the program until 2011, including a yearly summer mission trip on Appalachia Service Project and events and fundraisers throughout the year. She travelled to Haiti in 2012 with UMC Volunteers in Mission to witness and assist with continued rebuilding after the 2010 earthquake.

Natalee joined St. Martin’s staff in June, 2011. Since then, she has earned her certificate in Church Management from Villanova School of Business. She and her family joined the Episcopal Church in 2017. Natalee is a member of Trinity Episcopal Church in Swarthmore where she sings and leads the children’s ministry. Natalee serves on the Board of Episcopal Communicators. She lives in Delaware County with her husband Nathan and two boys, Liam and Ezra.