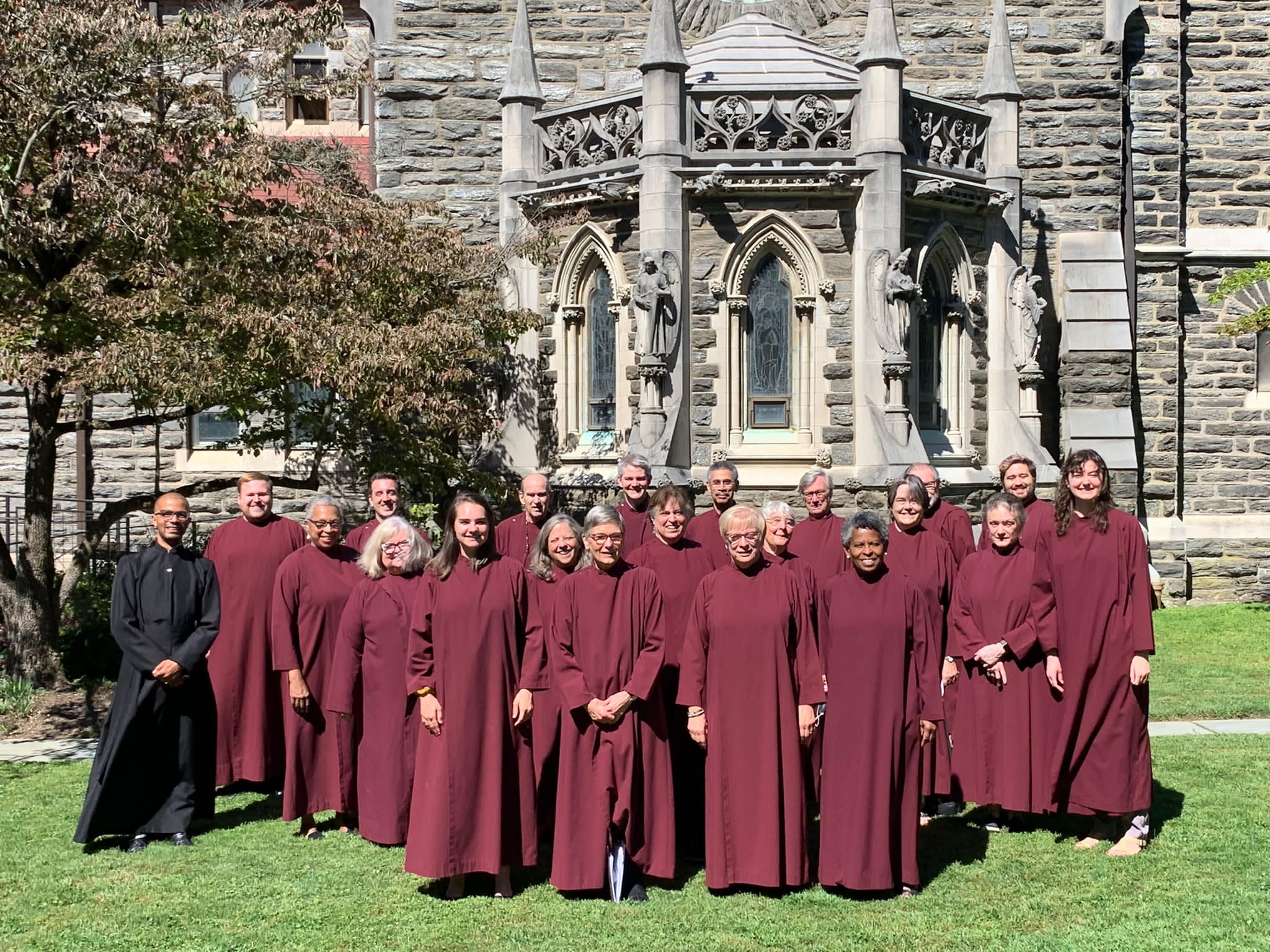 Above: On Sunday, September 19, 2021, the Choir and Director of Music Tyrone Whiting (left) celebrated 40 years of service from Connie Haggard, St. Martin's Liturgical Coordinator, Choir Librarian, and soprano. We are grateful that vaccination has allowed us to resume re-integrating our volunteer choir members.

The Choir of St. Martin-in-the-Fields is a volunteer ensemble of more than 35 members, supported by a professional quartet of section leaders, who support our worship at the 10:30 a.m. Sunday Eucharist and monthly Choral Evensongs. Rehearsals take place on Thursdays from 7:00 p.m. to 9:00 p.m.

With a repertoire spanning from the renaissance to the present day, the choir, while continuing in the richness of the Anglican/Episcopal tradition, often also includes new music and that from other genres/traditions to enhance worship and performances. Tallis, Mozart, Elgar, Stanford, Chilcott, Rutter, Hurd, Price, MacMillan, and much in between and beyond can be heard at our services and events.

As well as adding to our worship services, the choir perform concerts throughout the year, and in recent years have taken part in two choral pilgrimages to the UK. Most recently serving as Choir-in-Residence at Bristol Cathedral in August 2017, the choir also sang Evensong at Westminster Abbey in London.

Our professional quartet of section leaders add much to our music-making offering a strong scaffold to the choir’s development and serving as soloists in our service. We are particularly grateful to our quartet for their continued work and achievements during the COVID-19 pandemic.

An informal group of volunteers help support our semi-monthly Wednesday Compline service, singing plainsong chant in a beautiful short service, which has its routes in the 6th century.

Connie Haggard manages our extensive Choir Library, preparing scores for all our singers for each of our services and events.

For existing Choir members: visit the page below to access Choir materials and notices.

As Director of Music & Arts at St. Martin's, Mr. Tyrone Whiting (he/him) oversees all our music and arts ministries, outreach, and education. Tyrone says: "With a robed adult choir supported by four professional section leaders, a children’s choir Chorister program, and a robust series of concerts throughout the year, St. Martin’s is an incredibly musically active church, whose mission and outreach are at the heart of the music program. I am proud and grateful to all who participate and support our music ministries."

When St. Martin’s Church welcomed volunteer singers into the adult choir in 1981, Connie (she/her) volunteered. She is still singing, and the choir has grown from nine to 35. Her St. Martin’s journey has included choir librarian, three soup kitchens, board of Women of St. Martin’s, outreach committee, book room (now out of circulation) reorganizer and coordinator, clerk of the vestry and, her favorite, playing Peppermint Patty in St. Martin’s production of You’re a Good Man Charlie Brown in 1986. Currently she works alongside over 100 parishioners as liturgical coordinator, with hopes that many more will come on board. A graduate of Cornell University with a major in English, Connie taught in Ithaca High School and in the Wissahickon School District for 17 years. She and her husband, Dick, a retired research chemist, have lived in their Fort Washington home for 46 years where they raised three sons. They are fortunate to have three grand-daughters who live nearby. When Connie and Dick are not busy at St. Martin’s, they enjoy musical events, visits with family and friends, and travel, near and far.

Welcome to the Members' Page for the Choir of St. Martin-in-the-Fields, Philadelphia!

Please find below all registers, music booklets, and recent communications from the Director of Music.